Do Girls Like Short Guys: The Truth and What to Do About It 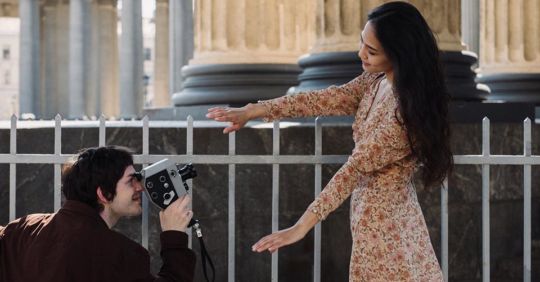 Do girls like short guys? It’s such a common question when it comes to modern dating. Men who are not tall often wonder whether or not they are considered attractive to women. After all, lots of women on dating sites specify what height they want their partner to be, but does this necessarily mean that being short makes you less attractive?

Let’s take a look at whether girls like short guys, key points to understand, a quick rundown on famous short men with taller partners.

Let’s take a look at some specific reasons why women do and don’t prefer short men.

The feeling of being protected

Women have an instinctual need to feel protected. Because they are often physically weaker than men, women seek out men that display physical characteristics that ward off those who can do them harm.

Many short men are as physically capable as taller men. It only takes a quick perusal of the Internet to find examples of shorter men winning fights versus taller men. By being in shape and displaying masculine traits, short men have the prerequisites of being chosen as a worthy mate.

Remember, even being a smaller man still makes you significantly stronger than most women will ever be.

Let’s be honest: Some women do have height requirements. In much the same way that many men have attractiveness criteria, some women only find taller men more handsome.

There’s very little you can do to change a woman’s mind or opinion on this matter, but you should realize that there are plenty of women who don’t care about height. Instead, it’s important to realize that many women are drawn to men for their personality and ability to provide for a family. By being a capable man, you are more than likely to fit their prerequisites than getting by on looks alone.

If a woman doesn’t find you attractive for being shorter than her ideal, then it’s easier to just move on and find women who do prefer you. While you may feel sad or passed over for something out of your control, focus on what you can change - such as your career, hygiene, clothing, personality, and so forth.

How short is too short?

If you’re a short man, you should realize that there are plenty of short women out there. The average height of a woman in the United States is 5’ 4”, and many women are shorter in other countries like Japan, Mexico, and Brazil.

To be “taller” than a woman may only be a matter of a few inches. While you may feel undateable due to your height, women often don’t care as long as you are a little bit taller or the same height. After all, everyone’s the same height when they’re laying down on a bed.

Overcompensating vs being competent

One of the biggest turn-offs that women have for short men isn’t their height - it’s their attitude. Short men are often a no-go for women who perceive them to be overcompensating for their height and shortcomings.

As a short man, avoid the “Napoleonic complex”. While Napoleon’s height was at an average 5’ 6’’ (average for European men at the time), a Napoleonic complex refers to a man’s reaction to feeling inferior. These types of men are often quick to anger and will go out of their way to be aggressive to other men to display dominance. For many women, this behavior is a turn-off, as it can cause unnecessary conflict and it reeks of low self-confidence.

On the flip side, many short men become overachievers. It’s no surprise that many shorter men choose to become overachievers as a mating strategy and as a personal ethos. By excelling in multiple fields, there’s a greater likelihood of success and appealing to women that appreciate each aspect. For example, sex symbol Prince stood at only 5’ 3” but he’s universally renowned as a performer, songwriter, and multi-instrumentalist (as well as talented in a number of other ways.).

With this as a metric, taller women - or those who say they prefer taller men - have an unrealistic dating pool to choose from. Some women may say how they are predisposed to choose tall men for their genetics, but there are a number of genetic factors that play into a person’s height. In fact, it’s not uncommon for shorter men to have taller children due to genetics and better nutrition.

My experience as a shorter man

First, I never considered myself short. While I could detect a boost in my confidence if I wore boots that boosted my height an inch, I always felt that my personality and confidence were always outsized.

Second, I realized that a woman’s receptivity to me was based on my charisma. Sure, I’ve had women reject me for being smaller than them, but I’ve always focused on developing skills and cultivating confidence by becoming competent. I have always thrown in a sense of humor to enamor women when I talk to them and leverage my intelligence, both of which are attractive to women. Taken from a holistic point of view, I can wow people more than simply being tall.

Third, I’m physically fit and make exercise a priority every day. Standing 5’ 7” with a reasonable BMI, I’m 190 lbs due to heavy weight lifting and long-distance biking. My diet consists of as much healthy food as I can eat, such as smoothies, homemade soups, salmon, and organic beef. When it comes time to physically perform around other men, I’m able to match those who are often taller.

I had seen several examples of taller men in school, college, work, and other social environments that seemed to do well with women, but didn’t have as many skills or confidence in themselves. In fact, women were often bored with these men beyond impressing their friends - they simply had no reason to cultivate any personality or skills. While in college, I not only completed my regular course work, but also wrote for the school newspaper, worked as a DJ on the college radio station, took ballroom dancing lessons, played in a metal band, played in the school’s pep band, and worked as a cab driver. These activities all helped me meet a lot of women.

One of my best friends is 6’ 3”. While we look like an odd pairing, we do extremely well when we’re trolling the bars of New York City and just enjoying life. Because we’re both highly-skilled and entertaining people, women are naturally curious about us and respond well. Height disparities are never an issue.

I also make it a note to not ever be competitive with my friend. If women are drawn to him, I don’t take it personally, as I have my own preferences for women that are non-negotiable. Instead, I usually place the role of talking my friend up and being convivial.

Last, it’s my opinion that being short is actually an advantage. Because I have to work on myself, I am miles beyond most of my competitors and date plenty of women.

There are plenty of women who form long-lasting and faithful relationships with men that are shorter than them. Here’s a list of notable celebrities and public figures with a shorter man with a taller woman:

So when you ask yourself, “Do girls like short guys?” and “Will they like me if I’m short,” consider these celebrity couples. Chances are, the women see more to the men than just their height and their paycheck (since the women in these couples also earn a lot). So in a just world (and we’re slowly moving towards that), being shorter than average shouldn’t be a hindrance to you finding a date!