How to Write a Great First Message 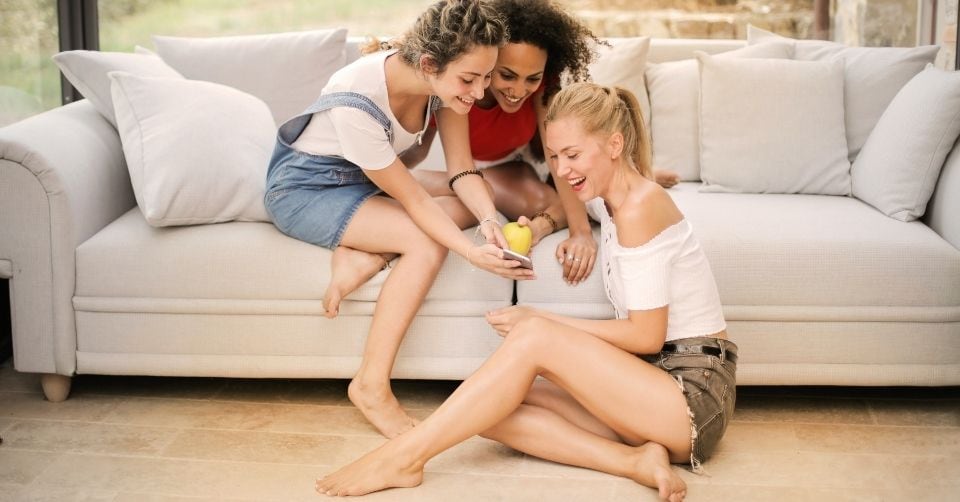 You said there are two things that make a good first message: noticing what I have in common with a girl, then starting a conversation about it.

I do that, but I still don’t get many responses.  What’s the deal?

1) finding common ground with a girl, then
2) starting a conversation about it.

The key – and the best way to start a conversation – is to ask a question.

Girls love when you ask us questions.  It’s flattering that you care what we think, and we like talking about ourselves.

But it can also be more complicated than that.  Online dating is a little like gaming.  Writing a message and getting a girl to reply is the final battle with the boss.  In order to win, you’ll need all the knowledge, strength, and skill you’ve acquired so far.

But you also have one big advantage.

I’ll tell you what a girl’s biggest weakness is.  We want you to win the battle.

That’s why we’re here, online dating.  Girls get so many bad first messages, we’re dying to get a message so good it knocks us over.

Here’s how to level up with your first message:

1. Focus on quality, not quantity.

Unfortunately, many guys try to message a bunch of girls, instead of just the ones who are the best matches.  They don’t take time to write good messages.  They’d rather write a lot of messages – and take any response they can get, whether or not the girl is a good fit for him.

Girls see through this.  We get so many of those lazy mass-messages that we just ignore them.

If you spend a little more time messaging girls who are a good match for you, you’ll probably find it’s much more productive.  Look for girls with common interests, shared beliefs, and similar goals.  Those girls are much more likely to respond to you because you are a good fit.

And a girl like that will appreciate that you took the time to read her profile, notice what you have in common, and ask her questions about those things, creating a solid connection.

Girls are tired of getting messages from guys who compliment our looks, but have nothing to say about the rest of our profiles. Those messages are shallow and meaningless – the online equivalent of getting dry-humped by douche bags in a club.

You’re not one of those guys, and you have to show us that.

The best first messages show us that you’re interested in who we are – not what we look like. 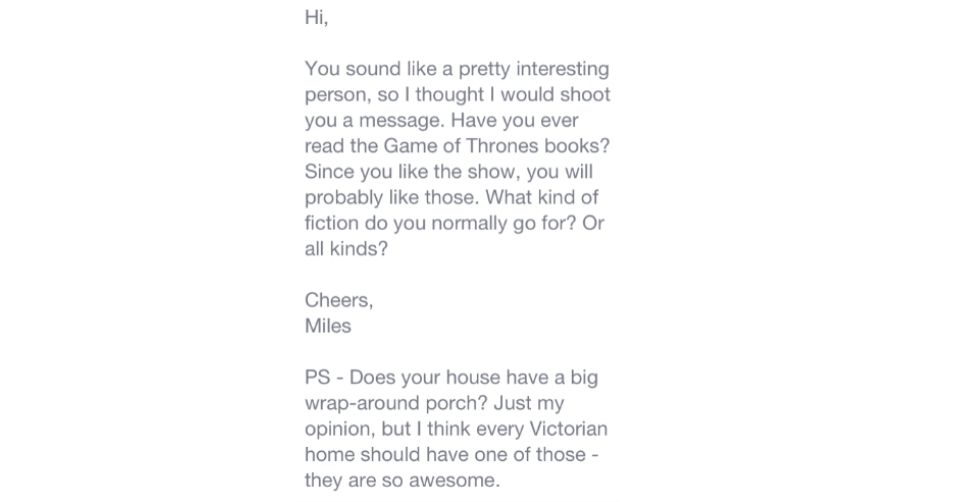 This is a great message for three reasons:

1) Miles leads with a compliment to my personality, rather than my face. This makes me open to what he’ll say next, because he’s showing me he’s different than those other guys.

2) He asks me a question based on a specific detail in my profile, and follows up with another broader question (bonus!).  This is excellent because Miles:

a) proves he read my profile,
b) starts a conversation about stuff we share in common,
c) reinforces further that he’s interested in my thoughts, not just my looks, by asking more about the stuff I’m interested in.

3) Miles shows some of his own personality by asking about my fixer-upper house.  I can tell he’s excited about the same stuff I am, which makes me excited to talk to him.

This is fuckin’ gold, Miles!

This might seem obvious to you and Miles, but so many guys don’t know HOW to do this!  They ask really general questions, like, “How’s your weekend going?” or “What’s up?”

These messages are the worst.

While “How are you?” is a question, it doesn’t actually start a conversation.  I can reply, “Good. How are you?” but then we’re back where we started.  Pointless.  I never reply to these messages because they bug the shit out of me.

If you read a girl’s profile and can’t think of a question to ask her based on the information there, don’t message her at all.

A great first message jumps past pointless questions and right into specific questions.  The best questions you can ask have “long-game.”  That’s why it works so well to ask a girl about something you have in common.  When you bring up a topic you both like, you’ll both have lots to say about it, which paves the way for a longer conversation.

For example: say you and a girl are both snowboarders.  You could easily lead by asking her the question: “Where’s your favorite spot to snowboard around here?”  After she answers that, you’re probably also interested in asking how long she’s been snowboarding, what gear she likes, and if she has any upcoming trips planned.

Because you opened with a topic she’s interested in, too, she’ll probably ask you those questions back – plus more of her own.

That’s a lot to talk about, and that’s long-game.

To achieve this, you have to ask her questions.  The questions are the gas.  Making a statement, like, “I like snowboarding, too,” doesn’t move the conversation forward.

As a rule of thumb, ask one or two questions.  Some guys make the mistake of firing off a long list of questions about a whole range of topics.  This is overwhelming to girls.  And it’s time-consuming to answer ten questions!

Stick with one or two low-pressure questions that make it easy for us to respond quickly because we’re interested.  Online dating is awesome because a girl’s profile is one big list of conversation topics.  Just pick one detail you think is cool, or you’re genuinely curious about, and ask her about it.

This guy does a nice job asking an easy question based on stuff we both like:

By Em
Communication and Dating Coach
Em is the author of the popular dating books Stand Out and Get The Green Light. Em is an online dating consultant specializing in practical, actionable advice for leveling up your profile, photos, messaging, and mindset. Since 2014, she's helped thousands of men improve their online dating results, and her insight has been featured on Lifehacker, Thought Catalog, and numerous podcasts.
Join Our Newsletter For Exclusive Dating Tips & Advice