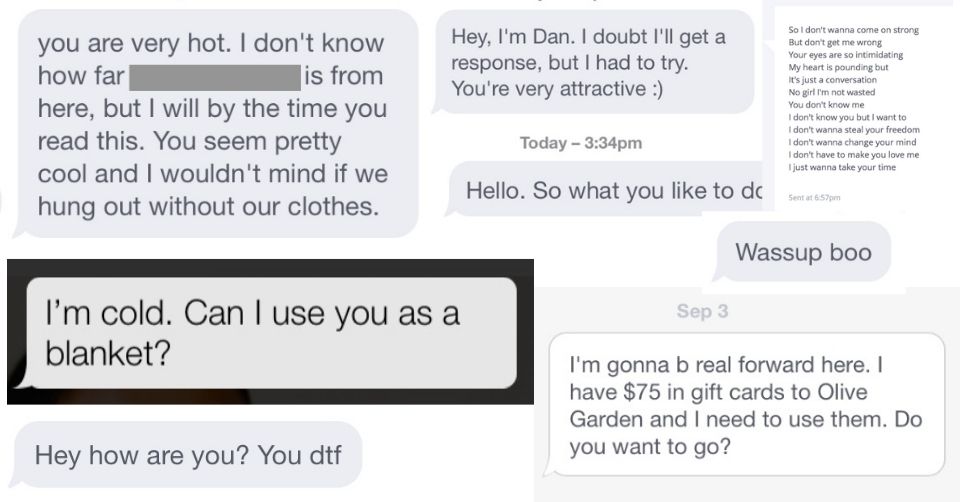 Meeting women online is so much easier these days thanks to all the apps. But the problem is that people tend to think it’s too easy. It’s as if saying “hi” is all it takes to make women want to meet up ASAP. If you think the generic greeting is fine, then youré probably committing one (or many) of the biggest online dating message mistakes to avoid.

Here are some of the worst mistakes you can make when trying to meet women online. Don’t be one of these guys!

"If you can't be a good example, then at least be a horrible warning."

Nothing embodies that sentiment more than these guys. So don't make any of the huge online dating mistakes, k?

1. Why bother crafting a message based on their profile when you just copy and paste the lyrics of a dreary country song? 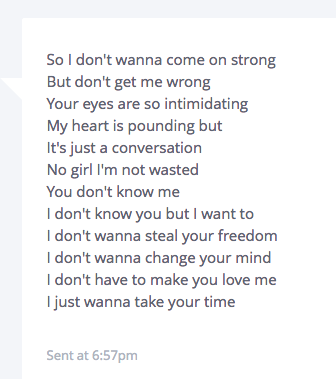 This sounds more like a caveman than Prince Charming. You're a grown man now.

3. An impressive amount of cringe in such few words. 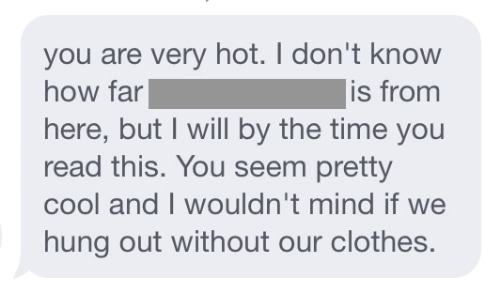 Next time, do your Google Maps search before sending a message, and maybe suggest the naked hang-out once you’ve gotten to know each other. 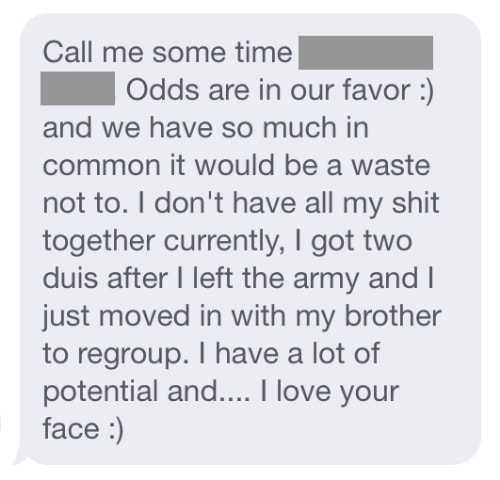 My man started well before drunk-driving this conversation off a cliff. This message has the potential to be the worst one yet.

6. Perhaps this guy was due to leave the country later that day. There’s really no other excuse to be so direct.

7. Everyone knows that ALL CAPS is the texting equivalent of shouting. 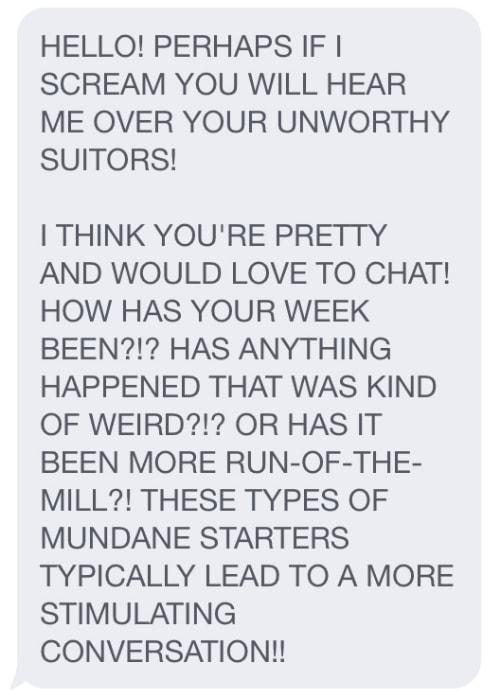 If you wouldn’t shout this over her “unworthy suitors” in a bar, then stick to lower case. Also, if you’re calling your own opener mundane, that’s a clear sign you need to up your Tinder game.

8. Surely you can do better than “good guy”.

Your bio is your opportunity to sell yourself. Not like this, though. But we like that he has standards and would seemingly settle for a girl who is a little bit crazy, as long as she “likes to have fun”.

A cheeky metaphor that implies something romantic. However, it could also imply something extremely sinister. We’re not sure if he wants her as a blanket in a cute way, or in a “Silence of the Lambs” way. 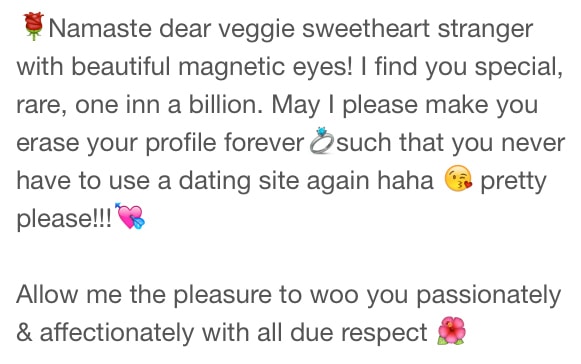 This guy is clearly a poet at heart. The proposal might have come a bit fast, but his main problem is this emoji situation is out of control. Probably best avoid asking “pretty please” to any potential dates too.

If you can’t back yourself, how is she meant to back you?? I’m sure you’ve got plenty of qualities to help you stand out from the competition. For starters, you used the correct version of "You’re".

12. Your 5/10 haircut isn’t private. The whole world has to see it whenever you step outside.

This prompt is your opportunity to stand out. Most guys usually write something boring like “I have this profile”. This guy went a bit too far against the grain.

13. Of all the pick-up lines she’s seen a million times before, this has to be one of the most mundane.

Most canned lines belong in the trash. But if you insist on using one, try to make it original and funny.

14. Remember how we just said most canned lines belong in the trash?

This one might stick in her mind a little longer, but it’ll leave a horrible taste in her mouth. 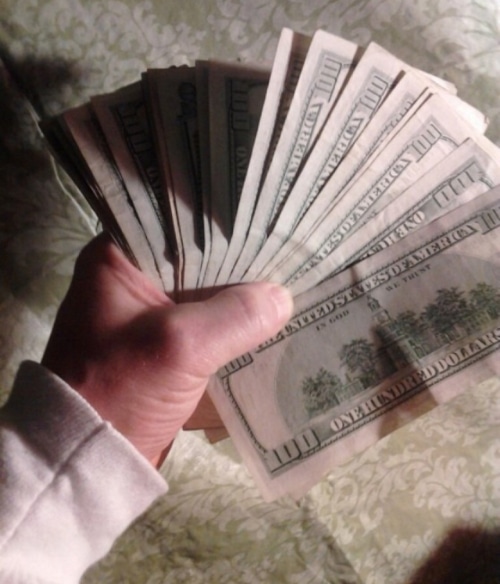 We understand that women like men who are financially stable, but they also like to actually see who they are dating. Also, this would appear to be only $2,000, which isn’t that impressive.

16. He might be smarter than the average bear, but he’s still a few loaves short of a pic-a-nic basket. 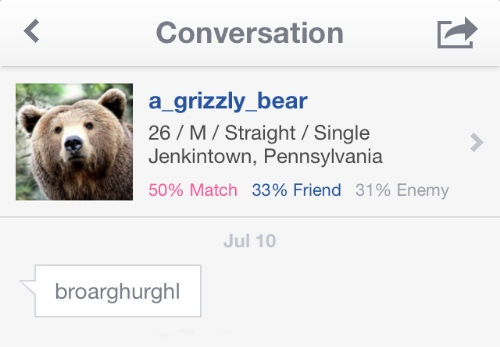 If you want a woman to take you seriously, stop with the alter egos.

18. Leave the adopted sister roleplays for the adult industry. 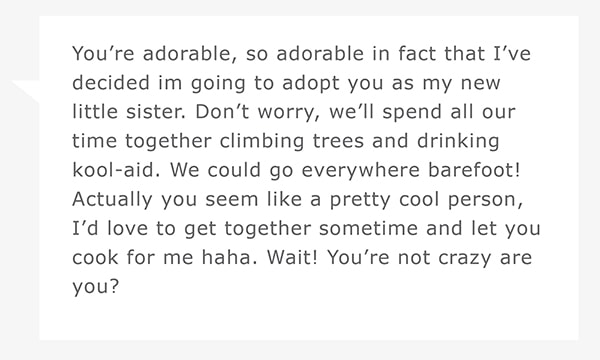 Something tells us this guy is going to be climbing trees alone and ordering takeaways for a while.

19. Sometimes a man will make an offer you simply cannot refuse.