LocalMILFSelfies Review 2023: Our Findings After Weeks on the Site 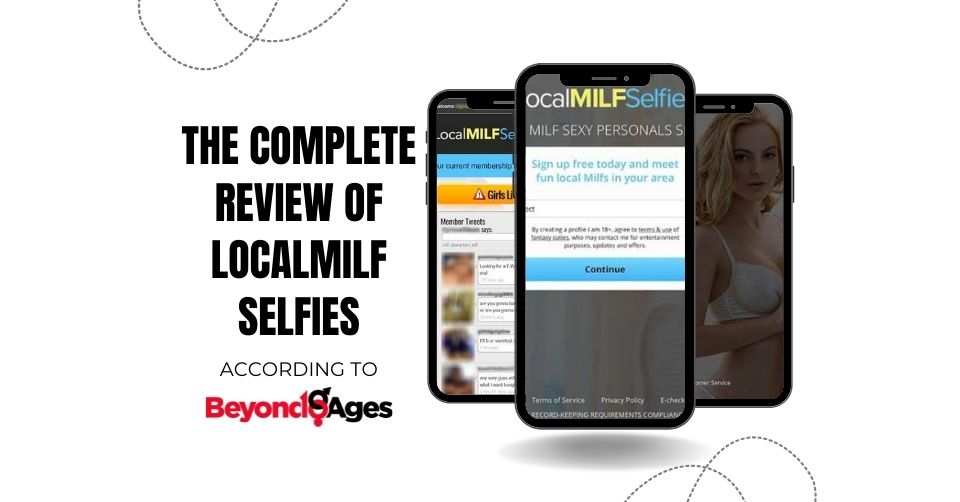 How we reviewed LocalMILFSelfies
The first thing I do to review a new site is set up a blank profile and let it sit there for a couple of days. This is a great way to weed out fake messages — usually, the more fake messages I get on a site, the worse quality the site turns out to be.

After a few days, I’ll go back and upload some pictures, fill out a profile and start messaging women. The aim is to use the site the same way I would my personal dating profile, to try to meet women and set up as many dates as possible.

Once I’ve seen all there is to see with a free account — generally, after a couple of weeks — I’ll set up a paid subscription. My goal is to test out all the features of the site as thoroughly as possible, so I can make an informed recommendation. After about a month of immersing myself in the website, I type up my notes into a comprehensive review to let you know whether it’s worth spending your time and money on a membership.

The best place to start is with a high-level overview of the site. I like to compare new websites to AFF because it’s consistently the most reliable hookup website out there. 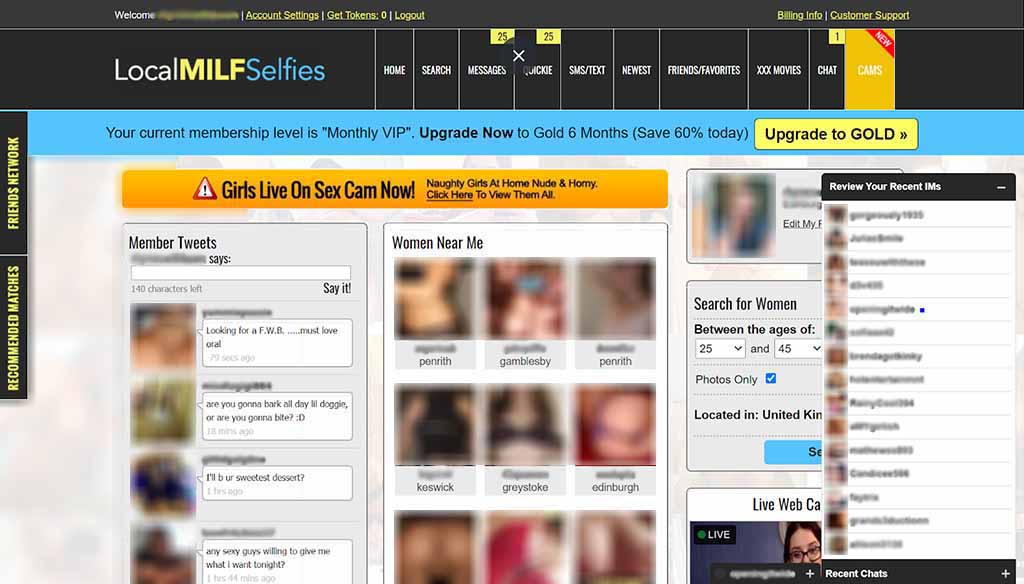 Spoiler alert: It didn’t live up to the hype. Possibly the most annoying “feature” of many low-quality hookup sites is fantasy profiles. Like the name suggests, these are completely made up profiles and messages, either computer-generated or from employees of the website.

These profiles are all clearly marked with an icon, but that doesn’t mean they’re easy to weed out. None of the five — yes, five — search functions have a way to exclude fantasy profiles from your results, which means you’ll need to individually click on every woman’s full profile to see if she’s real or “fantasy.” Good luck doing that on a free account, which only allows around five profile visits before it cuts you off.

Too many features and still not enough

To add insult to injury, my popup blocker stopped the content from loading, but not the window itself, leaving me with a blank window I still needed to click out of. 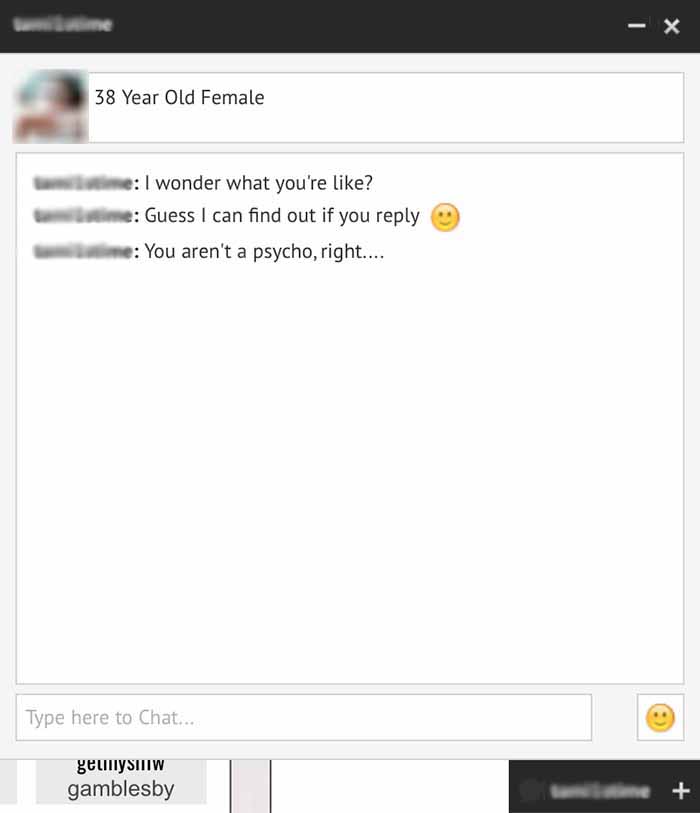 Some of the features were arguably more useful, like the ability to send instant messages to users currently online. Once again, however, there’s no way to block these from popping up on your screen, so if you don’t have enough tokens to reply — or just aren’t interested — they’re just annoying and in your face.

I found the “quickies” feature far more interesting, which shows you site-generated quick matches and allows you to click yes or no to a potential hookup. None of my quickie matches resulted in a hookup or even a conversation, but it’s an easy way to view potential matches and — unlike nearly everything else on the site — it’s available to free users. 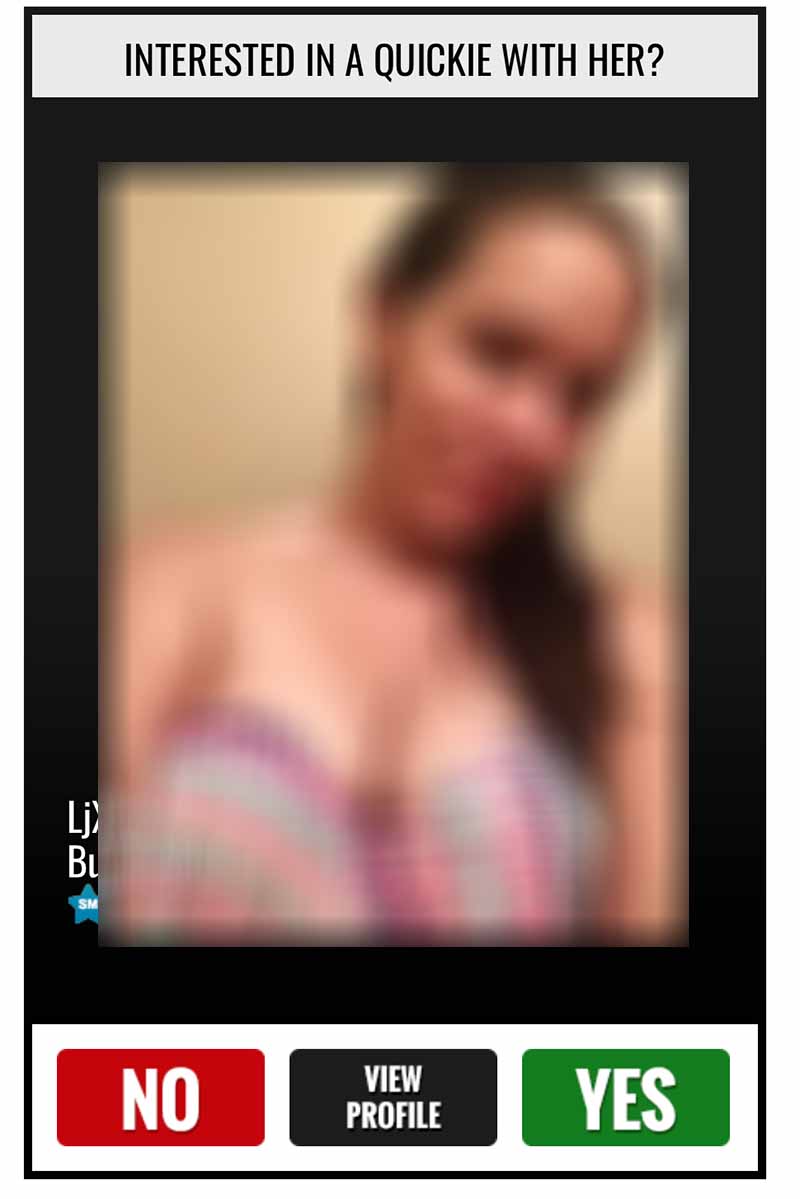 A paid membership isn’t the end of it 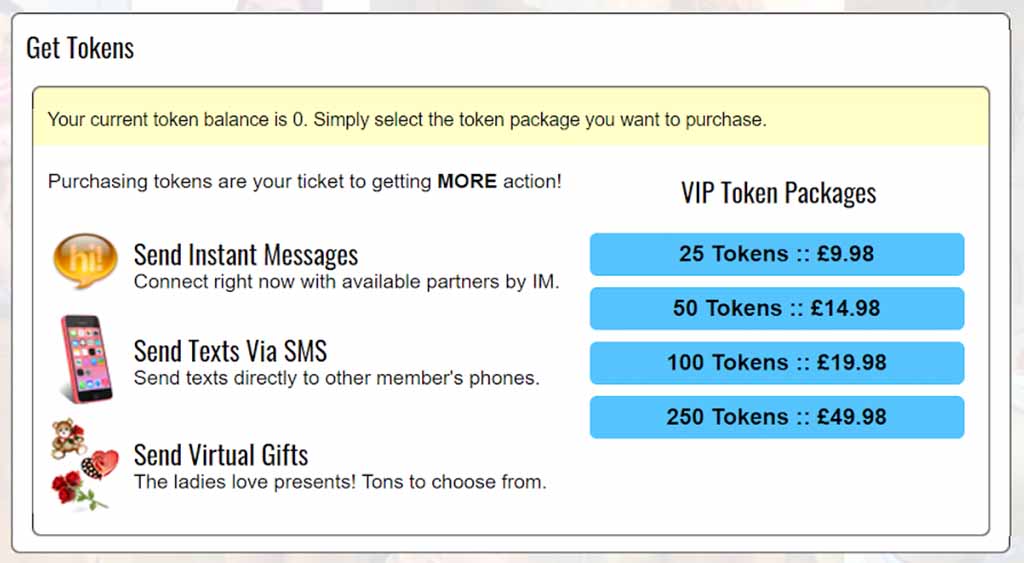 Even after paying for a VIP subscription, I was locked out of a lot of site functionality. The ability to send instant messages to online users and bypass the clunky mail system seemed promising until I realized I’d need to pay even more for single-use tokens in order to use that feature. 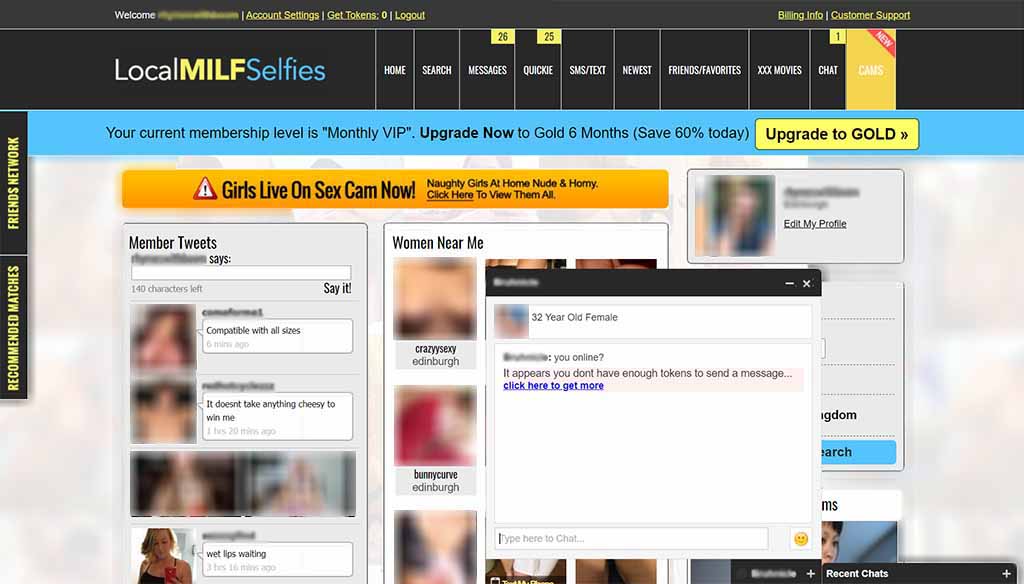 The ability to send SMS messages directly to user’s phones was similarly locked behind tokens, making some of the only positive aspects of the site prohibitively expensive.

AFF is a much better option

If you pinned all your hopes for a hookup on LocalMILFSelfies, there’s no need to give up on getting laid. There are so many other sites out there that can give you better chances of finding real hookups. Our current favorite is AFF, which has a free trial.

AFF, unlike other sites out there, has real human users, not computer-generated fantasy profiles. It also has a huge userbase, so even if you’re not in a big city, you can still find a handful of singles who are looking for a good time. Best of all, AFF isn’t out to scam you. You get your money’s worth and you use the site the same way you would any highly-rated hookup site.

So if meeting women online seems impossible, it might just be because you haven’t tried AFF yet.

Pros and Cons from our review of LocalMILFSelfies

It was hard to find many things to like about LocalMILFSelfies and most of them were paid features.

You can play into the fantasy if you’re into that

Most of the users here are slightly older women, often married, all supposedly looking for a no-strings-attached fling with a younger man. 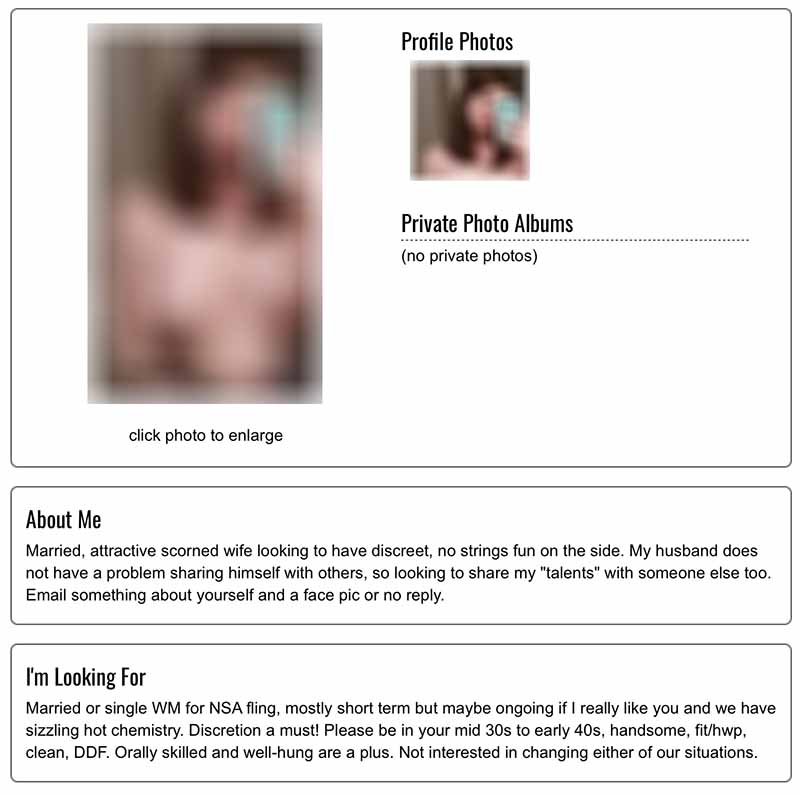 More than once I came across profiles with the same message almost word for word, stating that they couldn’t or wouldn’t respond to messages on the site but that men are “free to drop their contact details.”

I don’t know who needs to hear this, but never do this unless you’re sure the person you’re chatting to is legit or you’re hoping to break the Guinness World Record for spam in your inbox.

There are at least five different ways to search for women, including two links to the same search function in the main navigation panel, which ended up feeling redundant rather than adding extra value. 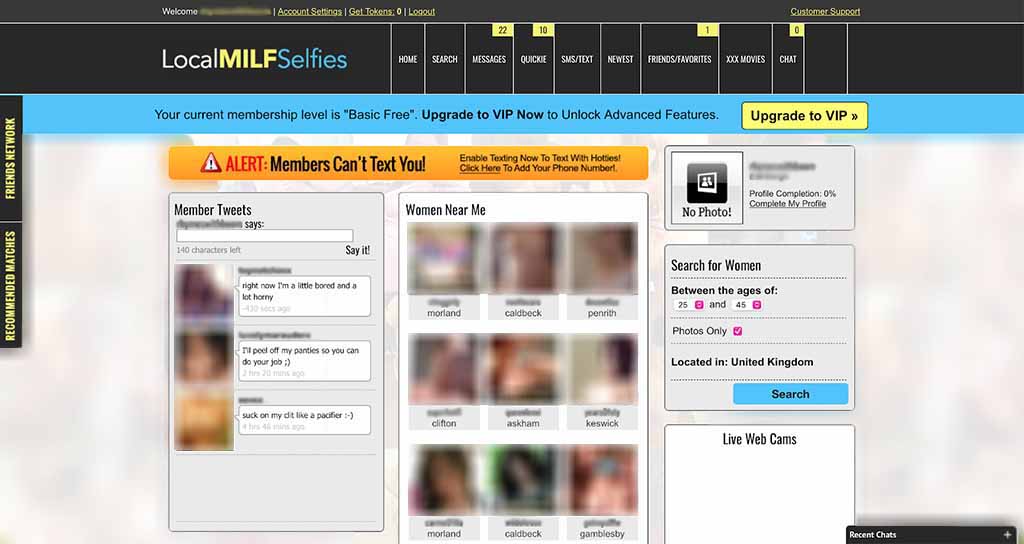 There’s no separate inbox for genuine messages vs automated requests, so everything is lumped together into your inbox and left for you to sort out. And reading or sending messages opens a new page every time, which means a lot of clicking if you’re messaging more than one woman at a time. 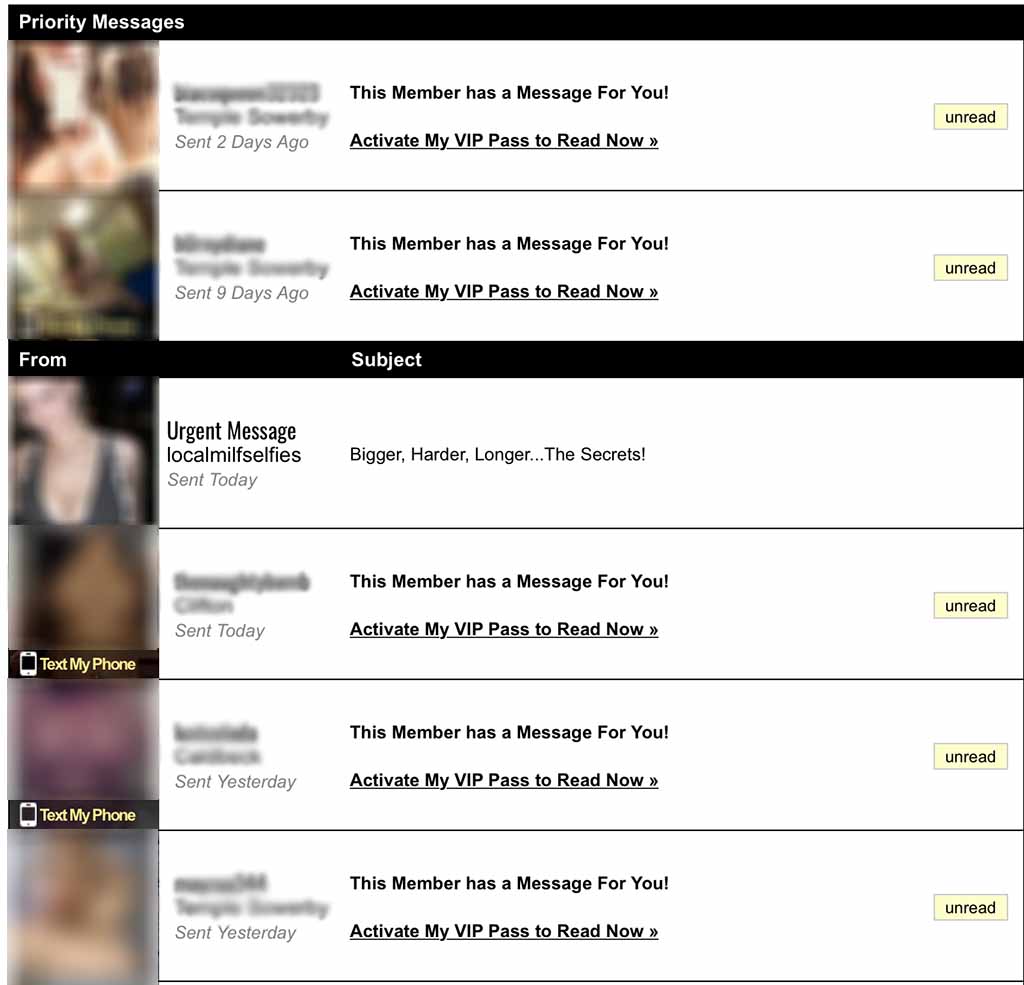 I received more than a handful of fake messages immediately after signing up, which is always a red flag. I got messages from dozens of women before I even filled out a bio and not all of those were from designated “fantasy” profiles.

Most of the women I messaged seemed happy to message a few times back and forth, though the majority of those conversations started to fall apart or become unnecessarily convoluted after the first basic message, which is pretty common in hookup sites that don’t have real women behind the profiles. 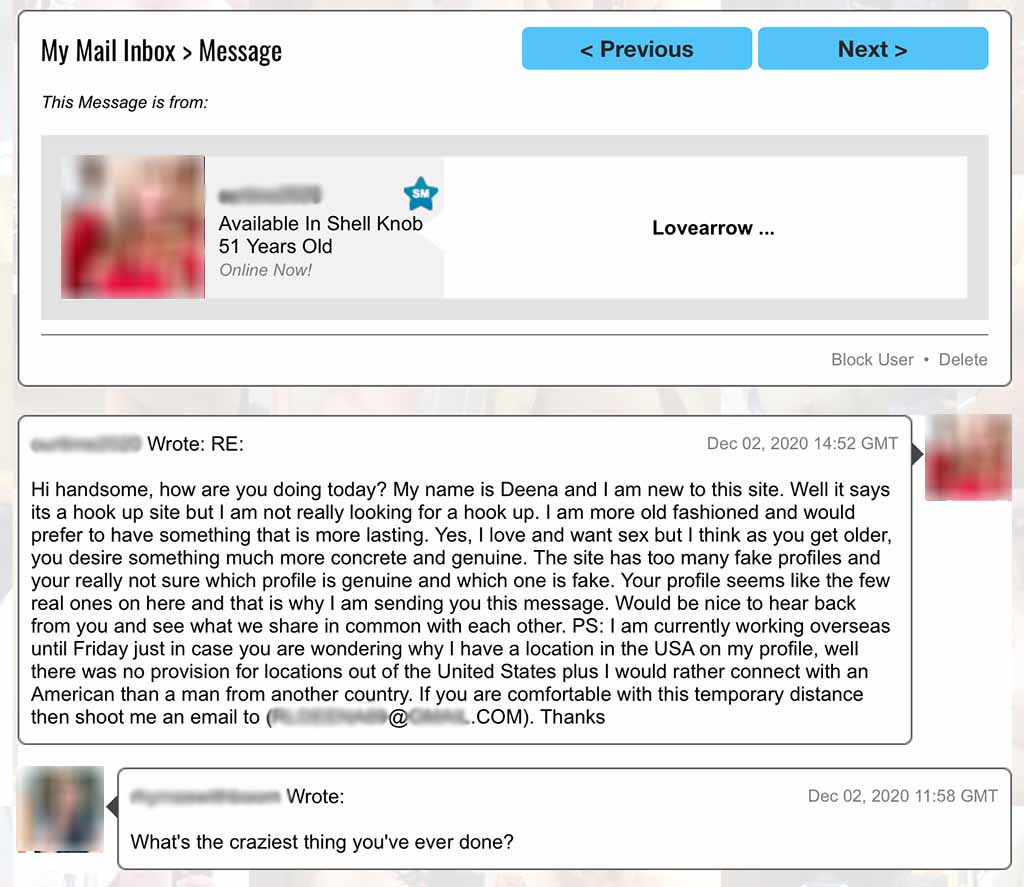 If you’re willing to invest a lot of money into your membership, the additional message types could be a neat feature. If you don’t love being tied to a computer all day or sitting around waiting for traditional mail, you can choose to send and receive text messages on your phone or send instant messages to women who are currently online.

Those features cost extra, though, even on top of a standard monthly subscription, so beware. And there’s no way to disable instant messages — or to stop them constantly popping up on your screen — if you choose not to pay extra for the ability to respond, which admittedly got a little frustrating.

Unsurprisingly, not much. Free members can read — but not reply to — instant messages sent by other users, respond yes or no to quick matches, and view a small number of profiles.

When you consider that even paying for a monthly subscription doesn’t unlock full access to all site features, it’s a pretty bad deal all around.

As with most sites that don’t really have much to offer, it looks like LocalMILFSelfies.com also gets revenue from ads. I saw a handful of ads for other sites as soon as I created an account: 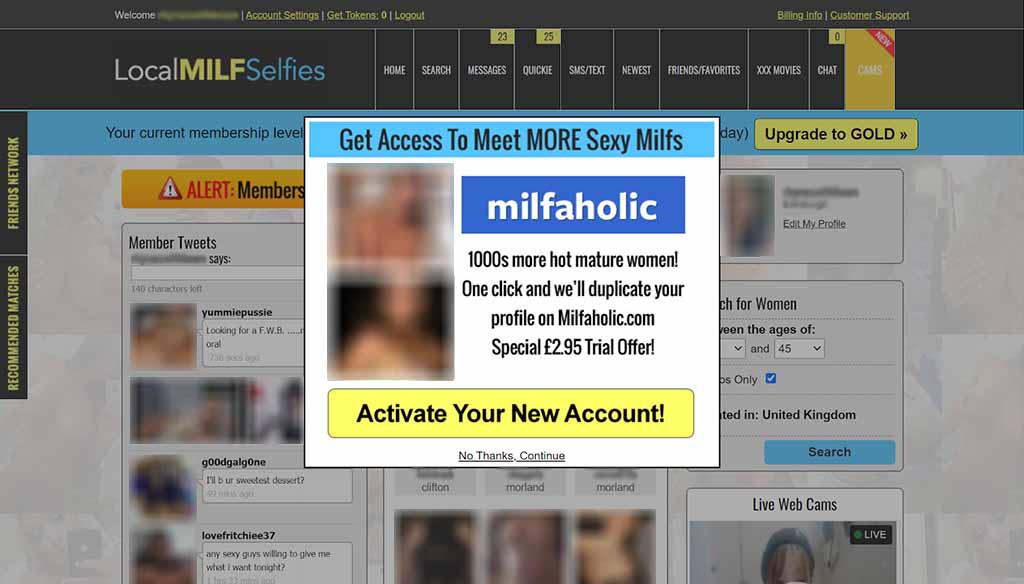 And as always, live webcam ads were all over the site too: 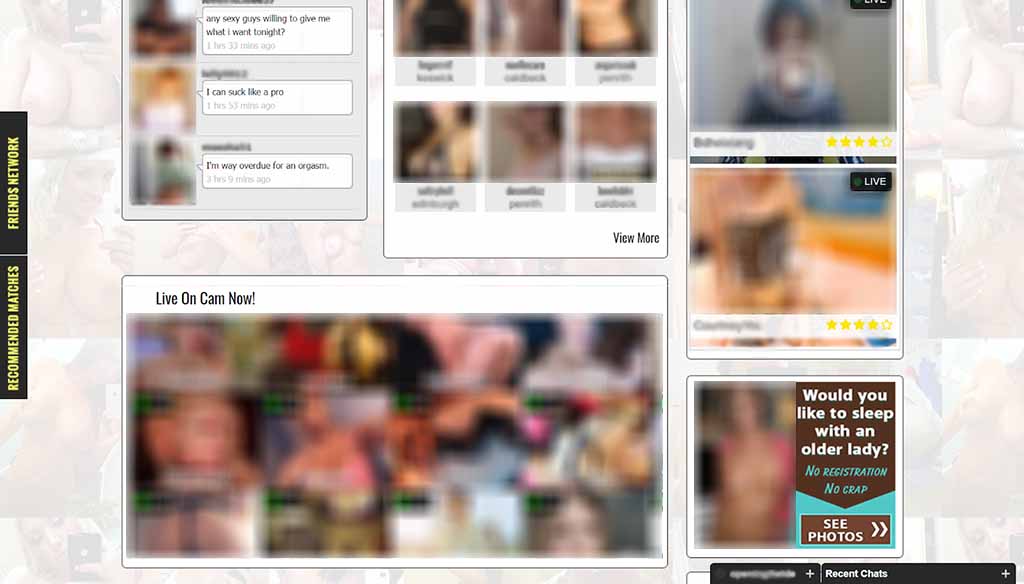 It didn’t help that internal banners advertising paid membership didn’t disappear even after I paid for a subscription, only started encouraging me to pay for the next membership tier.

LocalMILFSelfies is a “fantasy” dating and hookup site aimed at men who want to meet MILFs. That means there are no real users. Anyone you encounter on the site is either a bot or employee.

LocalMILFSelfies is owned by Plymouth Associates Ltd, which operates a variety of other online dating sites with the same mechanics.

Yes, LocalMILFSelfies.com is a real site. However, the users aren’t real at all. Their terms and conditions call them “Fantasy Cuties”.

No, LocalMILFSelfies is not a legit dating site since you won’t be able to meet any real people here.

No, LocalMILFSelfies isn’t a safe site to use.

What are LocalMILFSelfies alternatives?

For some legit alternatives to LocalMILFSelfies, check out our review of the best hookup apps and websites.

Is there a LocalMILFSelfies.com app?

No, LocalMILFSelfies.com doesn’t have an app.

How much does LocalMILFSelfies cost?

You can try out LocalMILFSelfies with a three-day trial membership or choose from a one-, three- or six-month subscription.

Can you send messages for free on LocalMILFSelfies.com?

No, you need a paid LocalMILFSelfies.com account to send messages.

There is no option to automatically cancel your LocalMILFSelfies membership. To cancel your membership, you’ll need to contact customer service directly and request cancellation.

By Ryan Vine
Dating Expert
Ryan Vine is a regular contributing author to BeyondAges.com. After many years of great success dating older women he now loves sharing the secrets to his success. When he isn't writing, he usually spends his time sweating at Crossfit, playing with his bulldog Max, and practicing the violin.
Join Our Newsletter For Exclusive Dating Tips & Advice