There are so many dating sites to choose from that they're starting to run out of names. Recently, the not-all-that-creatively named AffairHookups.com came to our attention (no disrespect). Don't get us wrong, we're very happy that there is plenty of variety out there. But, while a wide selection is nice, it also means you have to be very careful which ones you choose to use. Not all are created equally.

In fact, every year we put together our top list of the best hookup apps based on hundreds of hours of our own research.

That’s why we review dating sites for you. We sign up for the various sites, check them out, and report back what they get right and what they get wrong. That way, you know before you even visit which sites are legit and which are scams.

Keep reading our AffairHookups review to see whether the site is better than its name.

The world is full of people looking for love. And then there are those just looking for a fling. From every walk of life and any sexual persuasion, there are millions of people who are in pursuit of a steamy love affair, often with no strings attached. They’re out there, just waiting to be found.

Unfortunately, they aren’t always easy to meet. People don’t go around with big signs on their chests saying “I want to cheat on my husband,” or “I am looking for a discreet lover.” No, most people tend to be guarded about the things they truly want, especially when it comes to love and hooking up.

That’s why the internet has been such a miracle for the dating world. With a few clicks, you see exactly who is available and what they're looking for.

If there’s one thing that’s important in a pickup line, it’s originality. No woman is impressed by hearing the same line used over and over again. AffairHookups.com is a lot like an unoriginal pickup line: the first impression feels too familiar.

Their sign-up page looks like so many other dating sites, and not the good ones. The AffairHookups logo is red and silver and a bit pixelated. There is a seductive photo of a woman and a man reclining on a couch, clearly at the beginning of their tryst. Big block letters proclaim that the site offers a “Free Basic Membership”. It's all been done before.

If I’ve seen it once, I’ve seen it a hundred times. Sites that start out this way tend to offer the same, basic package of services. And they aren’t the ones you want to spend your time or money on.

AFF is sooooo much better

Whenever we put these reviews together in the back of our head we are always comparing the new site to AFF, at least a little bit. They are the best site out there for casual fun for most guys so it makes sense to compare.

Affair Hookups looks pretty bad in that comparison. AFF has 60,000,000 active members while Affair Hookups has less than 5% of that (if we are being VERY generous). With so few women on Affairhookups.com your odds are not very good at all.

At this point, we would recommend that you skip Affairhookups and just check out AFF for free. You will be much happier over there.

From blah to worse

Though unimpressed with the first impression, I signed up for AffairHookups.com and navigated into the site to check it out. It actually took me a little while to get onto the site. First, I had to confirm my email. I was unsurprised to find the confirmation email had been relegated to the spam folder. Here’s a tip: if something is in your spam folder, it’s probably spam. 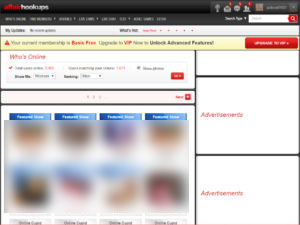 After confirming my email, I finally began exploring the site, still somewhat hopeful. Except, instead of looking at profiles, the site immediately took me to an account upgrade page. Why would I sign up for an upgrade before I’ve even seen what the site has to offer? I clicked away and finally got to the homepage. Boy was it ugly.

The site was jumbled and chaotic. There was a garish yellow bar at the top urging me to upgrade my account. There were a bunch of ads on the side and blinking menus at the very top of the page. The member profile photos were too small and boxy to really see anything. It felt like a website that hadn’t been updated in a decade.

Affair Hookups is definitely not safe for work

One thing about AffairHookups that became abundantly clear right away was that they hosted a ton of explicit content. I don’t mean late night television cleavage, or Baywatch bikinis. I am talking about serious adult content. And while I like seeing beautiful women as much as the next guy, this was a bit much for me. It’s not what I came to the site looking for.

You either come to AffairHookups looking for a date or for a hookup. Pornographic content doesn’t help with either agenda. As a rule, sites that look more like adult sites than dating sites are probably exactly what they appear to be.

As soon as I began browsing, I started receiving messages. A lot of messages.

Any guy who has ever tried online dating will tell you it’s not an easy thing to start messaging with a beautiful woman. You may send a message and get no answer, or just a single word reply. Having a woman message you out of the blue is the rarest of all. It was surprising to start getting messages left and right before I even had a profile picture up.

“What's your favorite sport?” one of them asked me. “What type of entertainment are you looking for?” wrote another. And the women who were messaging me were beautiful. It all seemed a little bit too good to be true. Why were they messaging a guy whose picture they couldn’t even see? This was a red flag.

Sites filled with unprompted messages from women right from the beginning are probably trying to get you into something other than a romantic affair.

Affair Hookups expects you to pay to play

When I tried to send messages back to these women, I found I was not actually allowed to. A page appeared that told me I had to upgrade my account before I could send messages. This is the type of paywall I’ve seen dozens of times on less-than-legit sites. 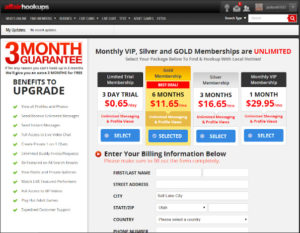 A lot of the best dating sites are totally free, and those that do make you pay usually have a really great reputation to earn your trust. So, when a site I’ve only recently heard of tells me I have to pay before I can send a message, I have to wonder, “What am I even paying for?”

If I can’t talk to the women first, how do I even know they are real? AffairHookups had officially aroused my suspicions.

Starting to feel pretty sketched out by the site, I wanted some answers. So I went to the terms and conditions page to see what their legal language looked like. Sometimes you can find some surprising admissions in the fine print. Case in point, this portion from AffairHookups.com:

"FOR AMUSEMENT PURPOSES ONLY . . . You understand and accept that our site, while built in the form of a personals service, is an entertainment service."

They just come out and admit it there. AffairHookups isn’t actually a dating or hookup service. So what about all of these profiles? Who are all of these women if this is just for entertainment? Well, the fine print has something to say about that, too:

"THIS SITE USES FANTASY PROFILES CALLED ONLINE CUPIDS®: You understand, acknowledge, and agree that some of the user profiles posted on this site may be fictitious and operated by the Site or its contractors."

There you have it, straight from the horse’s mouth. Fake profiles! That was the nail in the coffin. Any site that uses fake profiles is not actually trying to hook you up with a woman. They are trying to trick you into paying for an account so you can chat with a robot or a bored employee.

It only takes two to tango, so why these third parties?

Third parties are the outside companies that run content and advertisements on a dating site. All of AffairHookups’ “featured shows” and other featured content simply linked to third-party sites. I even found these links in the site’s menu items. “Live cams” and “Adult Games” were among the options. These kinds of links are especially suspicious on a dating site.

Isn’t the point of a dating site to help you meet real women in the real world? If that’s the goal, then why have all of these distracting links to content =you have to pay for and that feature women you will never meet? It’s a total scam, and worse, probably a major virus risk. Even for entertainment purposes, they aren’t worth the click.

Affair Hookups is scandalous in all the wrong ways

If a site has all of the basic elements of a scam, then let’s just call it what it is: a scam. AffairHookups uses fake messages, fake profiles, third-party sites, and explicit content, and it does so under the banner of a boring, unoriginal logo (and a silly name). It even admits in its own fine print that it is for “entertainment purposes only.”

You will find neither affairs or hookups on this site, just a bunch of content you have to pay to access. If you’re looking for an adult site, then maybe this is an okay place for you (but there’s plenty of better options in that category too).

If you’re looking for a hookup site, though, steer very clear of AffairHookups.com. I hope this review has been informative. Keep searching those dating sites, and best of luck with your affairs, in whatever form they may take.

By Jennifer Greene
Dating Coach
Jennifer Greene is a Dating and Sex Coach for BeyondAges.com. She loves sharing her experiences from many years of experience coaching others to success. She is an extremely accomplished coach that has had particular success helping men date older women throughout her career.
Join Our Newsletter For Exclusive Dating Tips & Advice