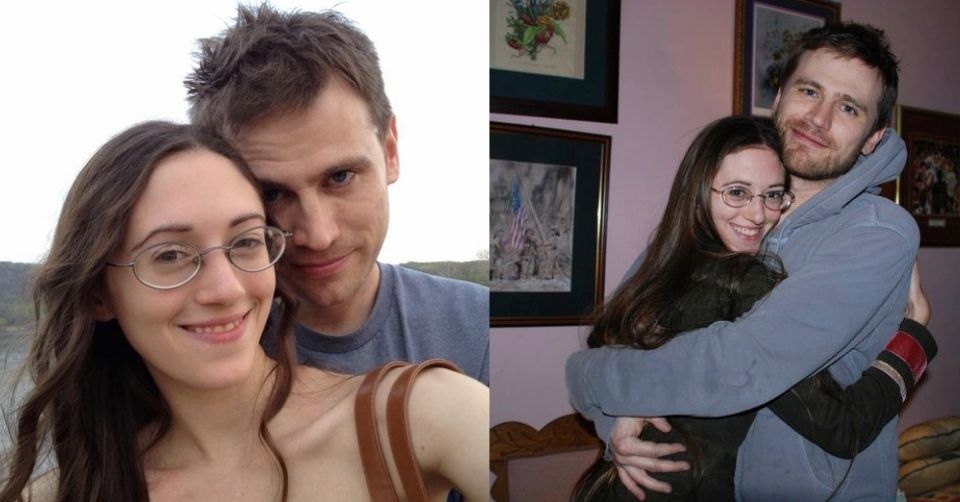 Currently: Living together in Langhorne, PA

What's Next: Taking art classes together. Inspiring and challenging each other (in between walking the dog and doing laundry)!

What did you think about his approach?
Rol said something like, “Hi, I saw your profile and you seem really interesting. I see you’re interested in art. What kind of art do you do? I’d love to see some of your work. I have some of my art on facebook or at this site…”

Why Roland?  What about his profile made you want to know more about him?
One of the things that I really liked about his profile was that he not only had multiple, clear photos of himself, but he showed himself doing hobbies that are important to him, and pictures of the results of those hobbies. He had posted photos of his paintings and photos of him playing in his band, so it gave me a lot to talk to him about.

How did you transition from OKC to meeting in person?
Soon after we started talking, we became friends on Facebook so we could share pictures of our artwork with each other better. From there, we began chatting on IM and video chatting. It was winter and there were snowstorms that kept snowing everyone in, so we had a lot of time to talk, and spent many hours online together.

How long did you wait before meeting Roland?
About a week after we met through the site, we were already collaborating on art through IM as I tried to write lyrics to one of Roland’s songs, and we talked through ideas together. Shortly after that we decided to see each other in person.

How did you know you were ready to meet Roland?
It was a logical progression because we couldn’t get enough of each other through our internet chats. Roland was very different from the other guys I’d talked to, and it just sort of felt natural to meet in person. Our conversation flowed easily and there was a real attraction, even through the computer.

What was your first date?
I suggested meeting in New Hope area, because Roland had mentioned always wanting to visit it. I was planning on going to a party at a local gallery where I’d exhibited before, so I invited him to come along.

After you met Roland, did you think his profile did him justice?
He had a very good profile. I always felt like I wanted more information on guys' online dating profiles, but his gave me some very good talking points, so I felt like he did a good job representing himself.

Roland and Meg with Colby, their terrier mutt.

How many guys did you meet in person through online dating before meeting Roland?
A few years previous to meeting Roland, I met my previous boyfriend on a vegetarian online dating site. During this round of dating, I only met one or two online dating guys before Roland. But I also went on several dates with people not from the online realm. In fact, I had several dates planned for the weeks after my first date with Roland, but I ended up canceling them after I met Roland.

What were your biggest pet peeves about online dating?
Men tend to send weird messages. A lot are too general, like “what’s up?” or “you’re cute, let’s chat.” In the beginning I tried to answer most of them, but most of the time they didn’t go anywhere.

Then there are also creepy messages or messages that put a lot of pressure on you, like “Meet me at the bar down the street.” I don’t know if guys ever have success that way, but not many girls I know would throw on their coat and run out the door to meet a perfect stranger.

I also think that sometimes men send out messages indiscriminately, just to see who will write back. We can tell when men are doing that! They send out “what’s up” to every single profile just to see who will respond. I was much more conservative about who I messaged, and then tried to comment on something in their profile to get a conversation going.

What advice do you have for guys who want to improve their game in online dating?
My advice is to be genuine and to provide talking points in your profile. We all love to laugh and love our families. Don’t bother writing that – it tells the other person nothing about you. Give something specific to talk about.

Put a moment of thought into your messages. Comment on something the girl has mentioned in her profile, and ask a question that she can respond to. Don’t message with any kind of sexual stuff on a typical dating site. You’ll get blocked immediately. Read MenAskEm and you’ll be fine!  (Thanks, Meg! 😉

What made you try online dating?
I’m an introvert.  I don’t like the bar scene.

What did you like about online dating?
I could talk to various women, hang out, and get to know them.  It was an easy way to figure out what I wanted, even it was by figuring out what I didn’t want.

Do you tell people that you and Meg met through online dating?
Yes.

What was it about Meg that made you want to meet her?
She seemed very natural, very real.  She was beautiful yet seemed to have a personality that meshed well with my own.

How many women did you meet in person through online dating before meeting Meg?
I met 10 or more, but I talked with many more.  I met a lot of great women.  I’m still friends with a couple of them.

When did you realize that you didn’t want to see anyone other than Meg?

Can you share any online dating tips for men?
You have to realize that women are bombarded by emails. And men generally tend to be more brazen. You have to find out a way to stand out from the perverts and nut jobs.

Did you have a message-writing strategy that worked for you?
I would look at profiles but not immediately email them.  They would see that I viewed their profile and then, when I did email them a few weeks later, I think it helped make them at least read the email.  It was like a hint, or a tap on the shoulder that paid off weeks later.

Also, you should probably read a woman's profile first and comment on stuff she likes.  Don’t type stuff like, “hey sexy, you look cute, we should meet up.”  She just got 10 emails from men twice her age saying the same thing!

When Roland and Meg aren’t making art or hanging out with Colby, they’re dressing up in amazing couple’s costumes for Halloween 🙂 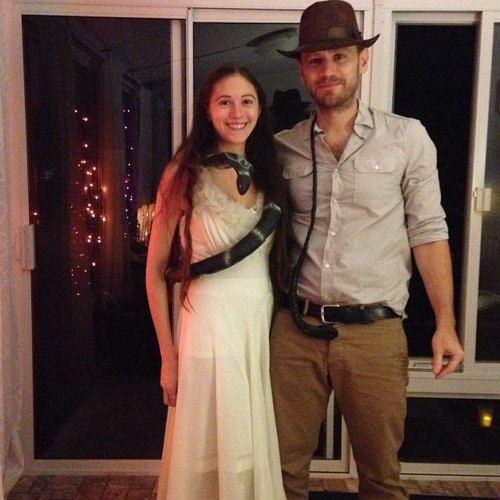