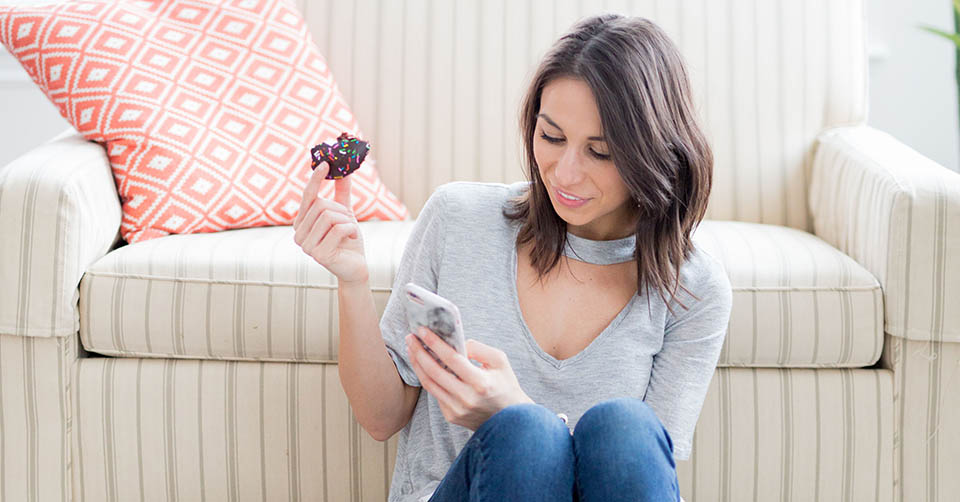 Navigating the dating space can be a difficult task in Arizona. While there are many eligible singles in Phoenix, Tucson, or Scottsdale, it can still be tricky to find the right partner. Outside those areas, the dating pool might even be more scarce… Until you use one of these Arizona dating apps.

During the past few years, isolation and fear made dating even more difficult. There weren't a lot of chances to meet people for quite a while. Even if you were to establish interest in someone, the chances are that you guys had to wait for some time before the actual meeting.

Thankfully, human connection is making its way back around. People are getting their conversational skills back and are ready to hit the dating scene yet again. If you are too, maybe we can help you find some love (of fun) with the best dating apps in Arizona.

There are a ton of singles using dating apps in Arizona 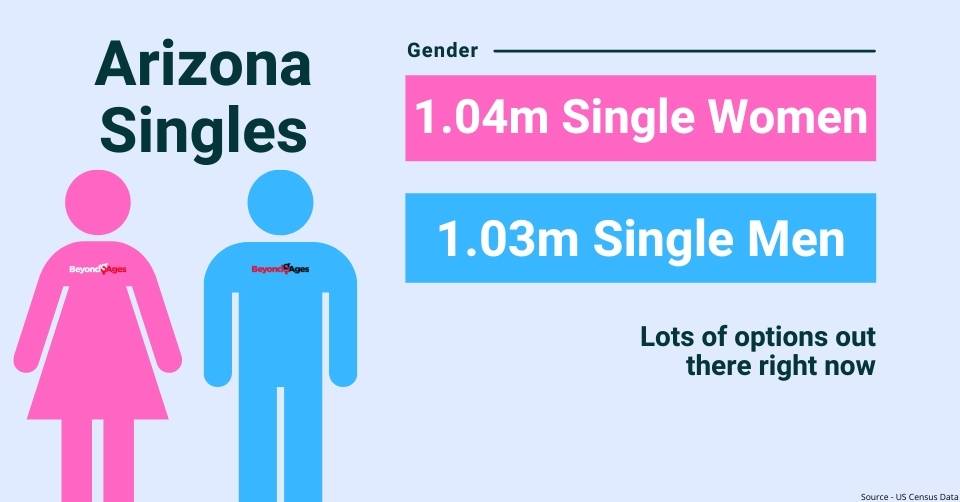 Among Arizona’s population of 7.6 million people, 27.29% of them are single. You may think, “Just over a quarter of the population? Those aren’t good odds for a single guy!” But you’d be glad to know that women outnumber men by about 10,000. If you haven’t been meeting anyone interesting, that might be because you haven’t been using the right Arizona dating apps.

Some of the dating apps listed are relatively easy to use, as you can just match up with someone immediately and start chatting right away. Their user-friendly interfaces are essential in any city, but especially outside those major cities. With fewer people scattered throughout the area, it'll be tougher to determine who is single and available outright. To make things easier, we'll be listing some of the pros and cons of our favorite dating apps to use in Arizona.

#1 - eHarmony (Android; iOS) is the best dating app in Arizona for long-term relationships 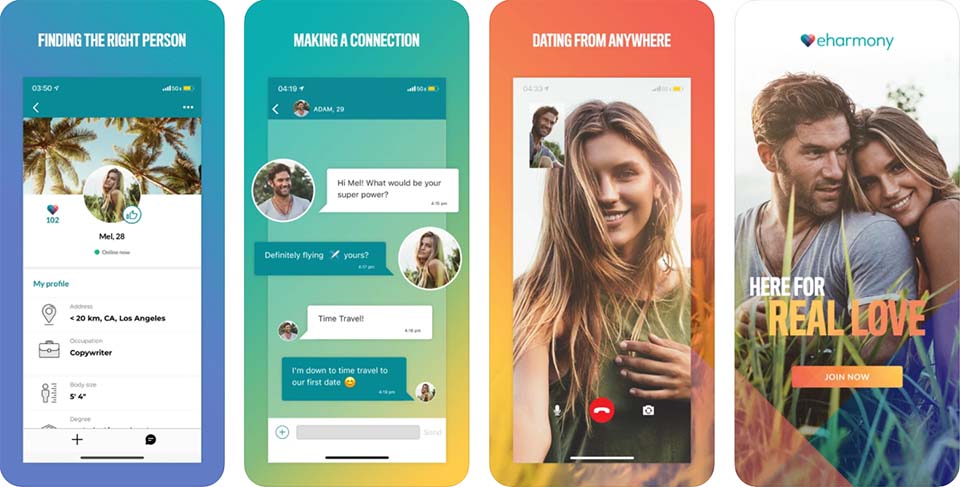 If you're ready to take dating seriously, then look no further than eHarmony. They've been around for a long time and have had plenty of commercials out. That's a tell-tale sign that they've done pretty well for themselves and cultivated a lot of revenue over the years—for good reason too. Our experts have found that there isn't a better option than this if you're looking for a long-term relationship.

They have one of the largest user bases around, and eHarmony will help you traverse that daunting ocean of fish. Their app is designed to help you meet compatible singles by way of their compatibility quiz. It's a bit of a process but will ultimately lead to better matches and has done well for plenty of past users.

They boast a jaw-dropping stat: 75% of all online marriages start on eHarmony. An impressive flex indeed. If that sounds up your alley, then look no further than eHarmony.

Why eHarmony is one of the best dating sites in Arizona

#2 - Match (Android; iOS) stands strong as one of the top apps for finding love 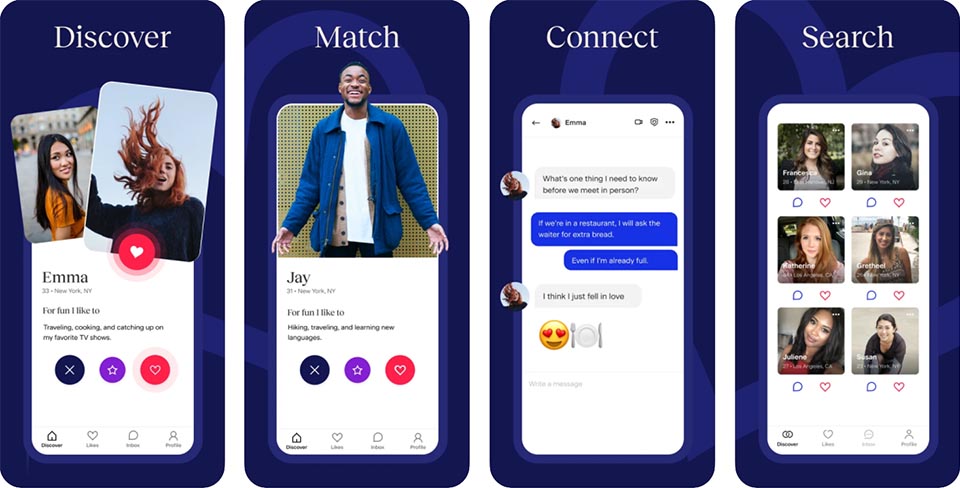 Match is no stranger to the dating game. In fact, it is well-acquainted as a guide to many compatible singles. The dating service has been around since 1995 and only shows its age a little bit by way of its mobile app.

Match.com is a staple in the internet dating scene, but their app is not too far behind. They are constantly updating it to ensure it is more user-friendly and packed with features. One noteworthy addition is their Match Events, where a Match user or affiliate can pitch a singles-only event. Match can then sponsor the event and even promote it for more local singles to join in on the fun.

Because it is one of the most established online dating services worldwide, Match has to find a way to pair these people up. Their reverse matching option can find you potential partners with certain traits you find important in a soulmate. Their software is also designed to find great matches for you. If you're on a premium plan and there hasn't been a match in your first six months, they'll refund you with their Match Guarantee.

Why you should try Match

What the app could use some help with

AFF is the king among Arizona hookup apps, with nobody seemingly in contention. While Tinder had its moment in the limelight, AFF is much more blatant with what you're looking for. Tinder's potential for dating kind of muddles that up, and no one is left on the same page. If you're trying to do one thing and one thing only, AFF is the clear-cut option by far.

AFF is a great option for guys who might not have had success on Tinder, as normal guys and girls everywhere have found success on this app. People on AFF are straightforward, which means a quicker turnaround time to fulfill your needs.

AFF has over 60 million active users, which opens up a lot of hookup possibilities in Arizona. We have a free trial down below where you can jump right in and enjoy the fun.

#4 - Zoosk (Android; iOS) is for younger singles looking for a long-term relationship

Zoosk is another top contender on our list, and for good reason. They are giants in the dating app industry and possibly the largest in the market. In addition, they are available in 80 countries and 25 languages. With that many options, you are bound to find somebody right for you (even if they might be overseas!).

Zoosk's user base is very large, but it still has its shortcomings. Yes, it is pretty diverse, but it is mainly geared towards younger adults looking for longer relationships. Unfortunately, that comes at the expense of older singles looking to find partners of their own.

However, if that is your desired age range, then Zoosk might be your go-to option. It might even be on par with Tinder regarding the number of users on the platform but accomplish what Tinder does not: Zoosk users have more success finding long-term relationships. If you’re looking for a relationship and you’re willing to go to look outside Arizona, let Zoosk be your navigator.

What could use some improving

The Arizona dating scene can be interesting, to say the least. There are plenty of people from all walks of life who are itching to join the dating scene after some restrictive years. Dating apps are plentiful, and most flock to whatever is popular.

While it has always been a popular choice among singles, Tinder is pretty flawed in some cases. It encourages bad dating patterns and can make people uncomfortable. Bumble helps mitigate that in some ways.

To those unaware, Bumble requires women to make the first move and send the first message. If they don't hit that send button within the first 24 hours, then that message will disappear. It's a small change to the modern dating app, but it makes for a safer and more comfortable environment. It also leads to a cleaner, less cluttered inbox that blocks some of those unwanted messages. It ultimately creates a safer environment for women, allowing them to engage more with their matches.

Why Bumble is worth your time

Great options above, but you may be wondering which of these apps will help you find casual, fun, carefree hookups. Below are the top hookup sites in Arizona we’ve tried.

Without a doubt, AFF makes hooking up easier

Too many dating apps these days mix users who want a relationship with those who just want something casual. With AFF, that’s not a problem. Everyone on AFF is looking for the same thing: no-strings-attached fun. Not a single user on this site is looking for anything more (unless you count FWBs as “more”), and that makes it a great option for finding hookups.

If you’re not a fan of AFF or if you just want an option with a dedicated app, OkCupid works too. The way it works is that OkCupid gets you to answer a questionnaire where you can state what you’re looking for and what you can offer. If you tick the box that says you’re just here to hook up, OkCupid matches you up with other users who want the same thing.

The Top Dating Apps in Arizona for Relationships 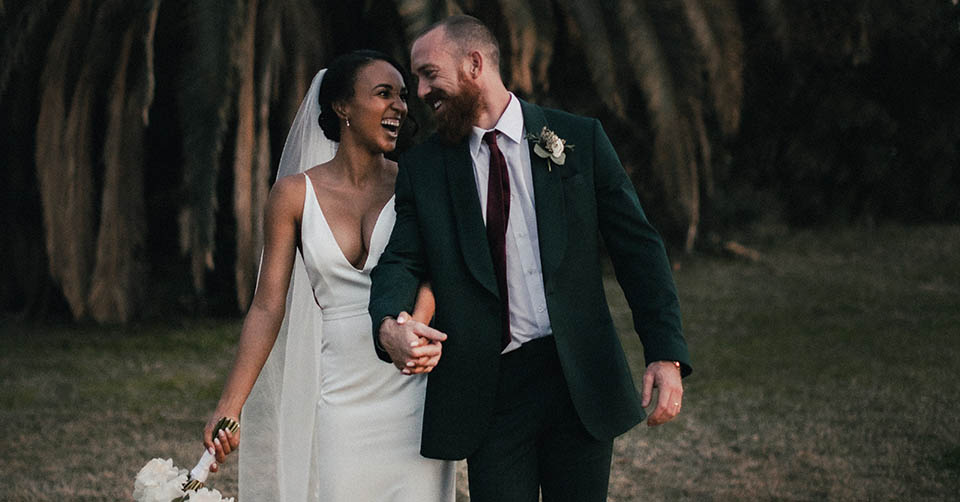 Hooking up isn’t for everyone. You might be open to trying a dating app because tons of couples say they used an app to find their current partner. With the options below, you might soon say the same thing.

Serious about finding a relationship? eHarmony is your best bet

We could go on and on about all the eHarmony stats we’ve already mentioned above. But we’ll let our own experience do the talking. In all the years we’ve tested eHarmony, we consistently find potential dates we’re compatible with. It’s not just compatibility based on looks and initial impressions. These matches were based on our hobbies, interests, life goals and more. So if you want an app that can match you up with someone you’ll actually want to date for a long time, eHarmony is the app to try.

Zoosk is the dating app for younger singles

eHarmony is ideal for singles who want to find a long-term partner they can settle down with in the future. But if you’re younger and you’re just looking for a relationship (no hookups!), Zoosk is the option for you. This app tends to attract younger singles who want to date around without necessarily hooking up. 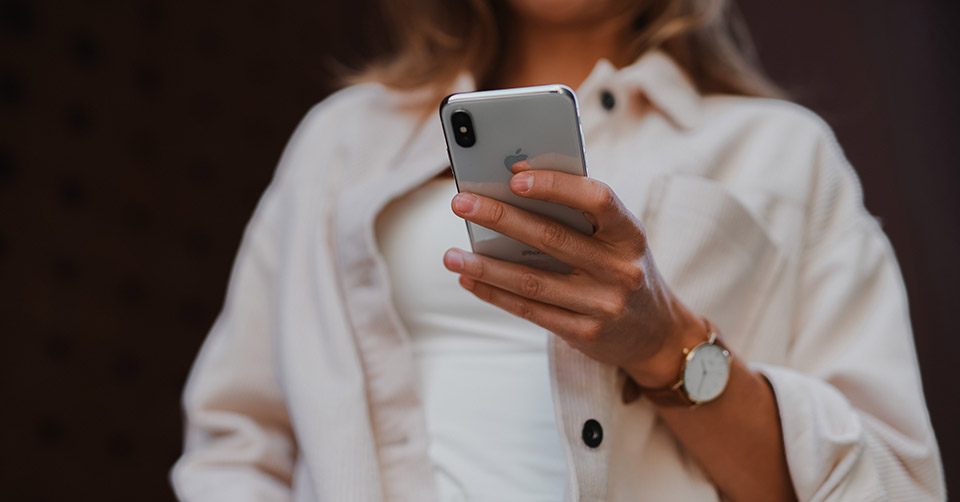 Free dating apps are a dime a dozen. Some work and some don’t. Those that do work tend to attract tons of singles, which is great if you want a huge dating pool to dive into. The problem with free dating apps, however, is that some users aren’t that serious about using it. You’d find users who are only there for validation, those who create an account and then abandon it, and you’ll also find the occasional scammer that slipped through the cracks.

With paid dating apps, on the other hand, you’re more likely to find users who want to make the most our of their paid memberships. They usually reply faster and actually use the app regularly to find an ideal match. However, if you’re unwilling to shell out some cash on a paid dating app, these are the top free dating apps in Arizona right now:

Give these options a shot to test the dating app waters. If you feel like their features aren’t worthwhile, it might be time to invest in a paid dating app.