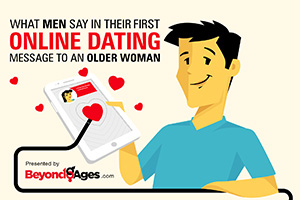 Determining the right thing to say in your first online dating message to a woman can be tough. How do you get a woman's attention when she might be getting bombarded by messages 24/7? You need to be able to keep her interested and actually get her to take action and respond to you.

Not an easy task for most guys!

We analyzed thousands of messages from men across the country and created the infographic below to give you a peek into how other guys are doing it. Find out what everyone else is doing so you can stand out!

What Men Are Saying In Their First Online Dating Message

Our team has combed through and analyzed thousands of messages sent to women by younger men in our research study to see exactly what they say in their first message and how you can use that data to improve your own online dating success.

We collected our message data from many different attractive women interested in dating younger men with widely varying:

Our goal was to create a general picture of how men initially communicate with older women online and we believe we have put together a fantastic picture.

If you haven't had a great time using dating apps to this point it's probably because you're using the wrong ones. Most guys waste their time on a site that isn't going to work for them no matter how good their first message is.

Fortunately, there are a couple of apps that dating experts have been recommending to regular guys that will work for you, especially with a great first message:

How To Use This In Your Own First Online Dating Message

There are 10 key takeaways from this infographic that can help you in your dating life:

1. Give her something to work with

The first message shouldn’t be a novel but it should make it easy for her to respond.

Nearly a quarter of men just said something like "Hi" or "what's up".

Way to set yourself apart from the pack guys....

In this day and age, assume most people have ADD online - you only have a VERY brief window to catch someone’s attention.

This is especially true for a woman in online dating who has HUNDREDS of matches.

You DO NOT want to make her work to like you.

Most guys kept the first message under 20 words.

Shorter and punchier is better but 20 words may be too short.

If you just send her the typical "Hi" or "Whats up" you are going to get a very boring response. This is a type of message you should probably avoid sending.

Do you think that is a great way to start of the interaction?

2. Don’t be afraid to talk about yourself

Dale Carnegie said that a person’s favorite topic of conversation is themselves.

But if you never tell a woman anything about you in your first online dating message, she has nothing to be attracted to… unless she’s 100% superficial and only looking at your bod.

Only 14% of all men talked about themselves when it came to messaging older women.

Yes, it’s good to keep the focus of the conversation on her, what she likes, and so on… But make sure to tell her about you!

Hit her with a few of the more interesting tidbits about yourself so that she will want to learn more. This is a great way to talk to girls online.

3. Most men talk about their fitness level or height (so don’t)

So what should you talk about with the older woman and tell her about?

If you want to be different, DON’T talk about fitness level or your height… 63% and 42% of all men, respectively, messaged about those things.

Women do care about that stuff obviously.

But get her more interested in your personality and who you are.

Here are some more interesting things you can talk to her about:

Take it deeper and don’t just be like any other guy.

Online dating is a numbers game but with a tiny bit more effort, you can drastically improve your results and your first message response rate.

4. If you’re going to compliment her be specific

Too many guys gave women a generic compliment in their first online dating message.

When it came to complimenting a woman’s appearance, 50% said something like, “You are hot.”

This doesn’t make her feel like you actually looked at or care about her.

You’ve got to be a bit different.

Find something specific you can compliment her on if you want to charm her: Her eyes, an article of clothing she’s wearing, even a personality trait that comes across while you two are texting.

Women don’t get that type of compliment a lot so it makes you stand out from the crowd and catches her attention.

5. A lot of guys go right for the date

8% of men asked the older woman out on a date in their first message.

While this can be seen as a bold move it is typically not very successful unless you are incredibly good looking.

A woman is not going to meet you offline unless she is interested in you and comfortable with you.

Peaking her interest can be pretty easy if you can convey that you have your life together through your profile.

Getting her comfortable enough to actually meet usually takes a little more work.

If you are blasting out messages to every girl you see online and don't care which you meet that is one thing.

If you are more selective and want to greatly increase you chances of actually meeting a woman in person you should wait until your third message to get her number or meet up in person.

6. Drink dates are popular but it can be good to mix it up

“Drinks” was the standard date most guys (32%) opted for in their first online dating message.

A few drinks helps to loosen people up and allows us to have better conversations.

But did you know that only 1% of guys asked older women out to dancing?!

Dancing is a fantastic first or second date (even if you can't dance).

It allows you to show that you can take charge, have fun, and that you are not afraid to try something you might not be great at.

If you’re scared of going dancing because you don’t know how, take some basic lessons.

You don’t have to be amazing, but taking a dancing class once a week for part of the year will put you in the top 10% of guys and give you a HUGE advantage over everyone else.

7. Asking for sex straight up happens but not as much as you might think

Asking for sex right away is VERY polarizing in your first online dating message.

While you may be able to find some success with this tactic it is typically a pretty low percentage move.

Every woman that we spoke to was extremely creeped out by the guys who sent these messages.

It probably didn't help that these guys almost always spelled something wrong!

Most likely, you’ll be scaring away a ton of women who MIGHT be down, but are afraid of committing to sex right away, or are unfortunately afraid of being thought of as “easy”.

Only 2% of men asked for sex as the first date.

Intuitively, most of us guys know that if we ask a girl to have sex with us straight away, the answer is most likely going to be “No.”

If you’d like to REALLY play the numbers game this could work, assuming you have an amazing body and pictures, and you’re looking for a woman who just wants sex.

8. Most guys leave the date general but you need to make it specific

Most men chose to leave the date as something general, like hanging out (around 30%).

Far less men made it something specific, like visiting a landmark in the city (6%).

Leaving it open and general is “safer”: There’s less risk of pushback or rejection if she doesn’t like your suggestion.

But being specific is better.

Not only can you screen to find out if you’ll like the woman (if she hates what you want to take her to), but feminine energy prefers having a specific and guided plan.

The more open you leave it, the less the woman feels like she can relax.

Especially when it comes to older women, you want to let her know that you have your shit together.

So, keep it specific: 8PM at the *neighborhood* park.

9. Thinking about telling her that she’s beautiful?

Most guys shied away when it came to using more sexually charged language.

While it’s good to be complimenting her, again, don’t be afraid of rejection.

Flirt online with a woman online to keep her interested (but not TOO much like asking for sex right away).

From all these takeaways you should know that it’s better to be DIFFERENT.

You DON’T want to be doing the same thing all other guys do, because you’ll just get lost in the crowd.

Here are some helpful tips from the 10 takeaways that can help you stand out:

By James Anderson
Dating Expert
James Anderson is a Dating and Relationship Coach for BeyondAges.com. He has many years of dating and relationship experience with older women of various ages and loves helping other men and women find success.