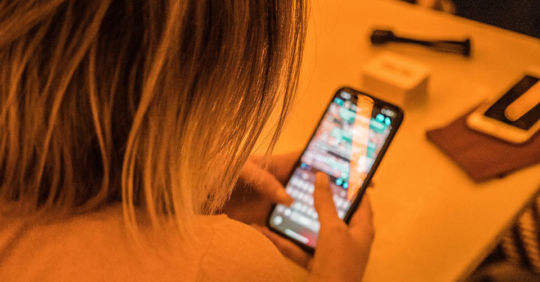 “Why does my ex-girlfriend keep contacting me?” If you’re asking yourself this question right now, then your answers are in this article. And spoiler alert: The true reasons why your ex contacts you might surprise you.

The obvious follow-up question is: “What should I do when she keeps contacting me?” This article will also answer that, starting by shifting the question back to you for a moment.

How Do You Feel About It?

Are you annoyed by your ex-girlfriend staying in touch with you, and wished she'd stop because it's keeping you from getting over a breakup? Or do you miss her too, and you’re wondering if you should give your relationship a second chance?

Keep your answer in mind as you read through this article. You’ll get lots of insight that you weren’t aware of, including the possibility that you might be walking into a trap.

Take what you’ll learn, create a plan of action, and put it to work.

5 Reasons Why Your Ex Contacts You

Your ex-girlfriend can contact you out of the blue for any of the five following reasons:

She’s trying to get back at you

First, she might be trying to exact some revenge on you. Why? Obviously, she’s angry and bitter over the breakup (or the relationship you had). And now she wants to get back at you by playing with your feelings.

Have her texts been angry, accusatory, or passive-aggressive? Then this might be the case.

Another possible reason your ex is contacting you is this: She’s testing you. She’s trying to see how you’re doing without her, secretly hoping you’re even just a little worse off.

This is normal human behavior, by the way. No one wants to think they’ve been a drag on another person’s life, and this goes double for women. So when your ex-girlfriend sees you doing just fine without her—perhaps doing even better—she panics.

So she snoops around your life even after the breakup, looking for validation that the “bad one” was you, not her.

The simplest reason why your ex contacts you: she misses you

Yes – it’s quite possible she misses you. Even with everything that caused the breakup, she still misses the good times she shared with you.

Is this the case in your situation? Here are the two biggest tell-tale signs she misses you:

Bad news, though: These are both signs of needy, stalker-ish behavior. So think twice before getting back together with her.

She’s confused about what she wants

It’s also possible that she’s confused. She doesn’t know what she wants. Part of her wants to stay away from you, and yet another part of her misses you like heck.

How can you tell if she’s confused? Here are a few signs:

Be extremely careful about that last sign precisely because of the fifth possibility:

She’s pregnant and wants to pin it on you

If your ex-girlfriend still wants to sleep with you and be “friends with benefits,” that’s a huge red flag. It’s quite possible she slept around with other men after your breakup and got pregnant. And now, she wants to pin the pregnancy on you to secure your money.

That’s a big possible reason why your ex is still in touch with you.

The challenge? There’s no way of knowing if this is her agenda. If you suspect she’s trying to pin a pregnancy on you, then resist the urge to get back with her. Never mind if she sends you nudes and such. Stay away for at least a few months and see what develops.

In the next section, we’ll discuss the three best ways to react when your ex-girlfriend keeps contacting you.

My Ex-Girlfriend Still Talks to Me: What to Do

Now you know the reasons why your ex still contacts you. With that in mind, it’s time to figure out what to do. It’s always wise to err on the side of caution after a breakup. After all, making a mistake now could mean decades of difficulty and frustration ahead of you.

Life is short, so I suggest you do one of the following three things:

Gently turn her down

This one’s simple enough. Tell her: “I’m glad you’re doing fine, but I’d really appreciate it if you respected my need for space right now, just like we agreed.”

That’s it. Be brief and be firm. Then check how she reacts to it.

If she’s not up to anything, she’ll agree to your request without any mind games or parting shots. She might apologize and wish you the best, but that’s it. If she doesn’t make a “mic drop” moment on you, you’re in the clear.

If she insists on staying in touch, that’s a bad sign. At best, she’s needy and desperate (which are terrible traits to have in a girlfriend). At worst, she’s up to something, and the more you communicate with her, the more you fall into whatever trap she’s weaving.

The worst sign is when you gently turn her down, and she tries to guilt-trip you. That’s your surest indication she’s scheming. You’ve been warned, my good man.

You can’t go wrong with the No Contact Rule. Simply don’t reply to her texts and don’t answer her calls. If you need to, block her number and social media profiles. Problem solved.

Granted, the No Contact Rule is hard to follow if you miss her too. If that’s how you feel right now, then I suggest you read up on how to stop thinking about your ex FAST. If you don’t stop missing her, you’ll miss out on so much more out of life.

Find out what she’s up to

Your third choice is to see if you can uncover her agenda. This means giving careful, measured replies to her texts and calls. Your goal is to slowly uncover what she’s really up to.

This is your option if you’d rather not turn her down or ignore her. That said, it’s extremely important to do things right—one slip and you’re in a world of hurt. Here’s a guide on how to respond to your ex. It’s a substantial read, so be sure to take notes.

What to Do If My Ex Keeps Texting Me

Now, you might wonder: “My ex-girlfriend keeps texting me. Should I reply to her, ignore her, or block her?”

Despite knowing all the reasons why your ex contacts you, it might still be pretty tempting to reply. After all, she’s just texting you. Not much harm in that, right? Right?

It’s worth mentioning that the rules change slightly when she contacts you solely over text. Unlike calls, where she must talk to you in real time, texting gives her time to craft measured, calculated messages. If she’s planning something shady for you, texting is her favorite tool.

So is she contacting you only via text? Then here’s what might be happening and what you should do:

If she’s just texting you, it may mean she’s found out you’re doing well without her. That hurt her pride, and on instinct, she wants to ruin things for you and make herself look blameless.

How can she achieve that? With carefully crafted text messages, that’s how. With texting, she can plan her approach meticulously.

My advice? Don’t mind her, even if she tries to bait you into a fight.

She’s trying to turn you into an orbiter

What’s an “orbiter”? It’s a guy who follows the girl he loves, even if she doesn’t reciprocate.

Even average “Plain Jane” women will have a few orbiters in her life. The more attractive a woman gets, the more orbiters she’ll have, willing to do whatever she asks.

They’re called orbiters because they’re like planets in a solar system, orbiting the woman but never getting close enough to her.

If she’s texting you, maybe she’s trying to turn you into an orbiter. It’s the ultimate revenge, making you look like it was you who made a mistake breaking up with her.

Let’s make sure that never happens, shall we?

What to do about it

Ultimately, you’ll need to understand that your relationship ended for a good reason. It’s often better to just follow through with your agreement to separate with your ex-girlfriend and move on, even if it hurts for a long time. After all, it won’t hurt more than if you got back together with her and ended up in a much worse situation than before.

So weigh the pros and cons. Once you decide what to do, the tips in this article should help you get the best outcome—for her, too, but more importantly for yourself.