Do Girls Like Guys With Tattoos In 2023? Here's The Truth 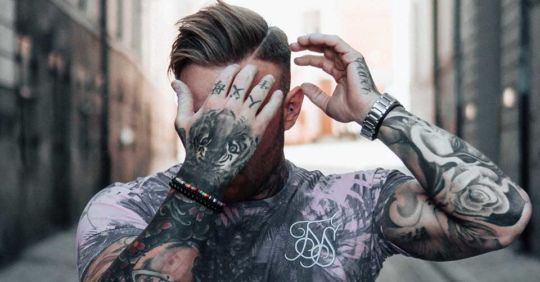 If that sounds like you, then this article will answer all your questions.

Spoiler alert: The answer is “it depends.” After all, different girls have different reasons for playing the dating game. And as a result, some may love tattoos and think they’re sexy... while others think they’re inappropriate and scary.

So, what about you? Are you in the dating game for hookups and flings? Or are you looking for your future girlfriend and wife?

Keep your answer in mind as you read through this article. So, do girls like guys with tattoos? Let’s take a look.

Like you, women play the dating game with certain goals in mind. For simplicity’s sake, let’s divide the female species into two groups: Those who are dating for the fun of it, and those who are looking for a boyfriend and the future father of their children.

If she’s just dating for fun...

...then the answer is “yes,” she likes guys with tattoos. Women who are looking for one-night stands, secret lovers, and friends-with-benefits will probably like your ink job.

According to a survey by the dating app Type, nearly two-thirds of its female users find men with tattoos attractive. And yes, since it’s a dating app, it’s safe to assume most of its users are just dating around for fun.

Likewise, many other studies suggest women associate tattoos with male traits such as aggressiveness and dominance. Put simply, men with tats are immediately perceived as the “alpha male bad boy” types—and that’s why they’re so attractive from a no-strings-attached standpoint of dating.

There’s also the fact that getting inked is painful. When they see the tattoos on you, they see badges of honor—proof of your strength and toughness as a man.

And lastly, women tend to think if you’re a bad boy, she doesn’t need to keep up the “good girl” facade. She can let her hair down, be herself, and get naughty if she wants to. All this adds up to one thing: A tattooed man is a hookup-minded girl’s dream come true.

If you're struggling to find dates it probably isn't because of your tats. You just need to update your approach. A lot of guys don't have much success using dating apps because they aren't using the right ones. It's a very important decision since online dating has become critical to meeting single girls and you miss out on so many opportunities if you're not on at least one app.

These are the apps that our team of dating coaches has seen regular guys with tattoos have the best results with:

On the other hand...

If she’s looking for a serious relationship...

...then the answer is “no,” she probably doesn’t like men with tattoos. Many of the same studies mentioned earlier found that women found inked men to be worse as potential boyfriends, husbands, and fathers.

Naturally, you’d think: “That’s kind of presumptuous of them, isn’t it? I’m sure my tattoos don’t control how well I’ll do as a family man.” And you’d be absolutely right.

Unfortunately, that’s not how things work in the dating game, is it? It doesn’t really matter what we guys think. Ultimately, it’s the ladies who pick who to date—and since first impressions last, your tats might actually ruin your chances with the type of women you want.

So what’s the bottom line?

If you’re looking for your future wife and you haven’t gotten a tattoo yet, don’t get inked. You might miss out on “the one” simply because she got turned off by your cupid tattoo... and that’s a shame.

Meanwhile, what if you’re the former? What if you’re in the dating game just for the fun of it, and you’re looking for like-minded gals?

Now that you know tattoos will help your game instead of hurting it, let’s get down to the details.

Women tend to like certain tattoos much more than others. If you haven’t chosen what tattoo to get, stick to these if you want to raise your success rates with the ladies:

What parts of your body should you get inked? If you want to keep it safe, stick to your upper chest and shoulders—areas that highlight your muscles and can be hidden when you’re at work.

If your work doesn’t mind you having visible tattoos, you can extend all the way down your arm. Whatever you do, though, don’t get tricked into getting a tramp stamp, an ankle tattoo, or angel wings on your back. (Just trust me.)

Meanwhile, steer clear of the following types of tattoos. Even women who are looking to hook up with you might change their minds when they see these:

Keep these tips in mind when getting your first (or next) tattoo, and you should be fine with the ladies.

What Are the Types of Girls Who Like Guys With Tattoos?

Now, let’s say you already got your tattoos. Now you’re wondering: “What types of girls out there would like me? Where should I go meeting girls if I want my best chances at success?”

Again, the girls who will dig your tats will most likely be those looking for quick flings. Here are a few categories to help you get started:

...And where to find them

The easiest place to find like-minded women is—of course—dating apps. There are tons of apps and sites out there filled with women looking for the same thing you want: Good clean fun with no hard feelings later.

The first app to come to mind is Tinder. It’s probably the most popular hookup app today, and if your profile pic shows your tattoos, you might get a few more matches than usual. If you don’t like Tinder for any reason, try these other hookup apps.

You’ll also find these women in the club, at parties, or at other social events. They’re not quite as easy to find as on Tinder, but if you know what to ask, they’ll reveal their true natures fairly quickly.

To wrap up this article, let’s answer another common question:

What if I Have Tattoos, But She Dislikes Them?

So you got tats, and you’re seeing this girl you like, but she doesn’t like tattoos. What should you do? Is there anything you can do to change her mind?

Here’s what I’d say: Carry on with your plan. Keep spending time with her until she falls so madly in love with you that your tattoos become an afterthought to her.

Here’s why I suggest you carry on: Deep inside, every healthy woman will feel irresistibly attracted to two male traits: Strength and dominance. There are other traits she’ll like, of course, but these two traits stand front and center.

The key is to get her attracted to you anyway—at least enough to become a fling. Then, as long as you act quickly and correctly, you can turn your relationship into a more serious one almost overnight. We also have a guide for how you can turn a fling into a relationship.

So now that you know which girls like men with tattoos and which ones don’t, should you get inked or not? Like most things in life, your choices will depend on your goals for playing the dating game. Make the decision and the rest is easy.