The Smooth Ways To Respond If She Blocks You That Work 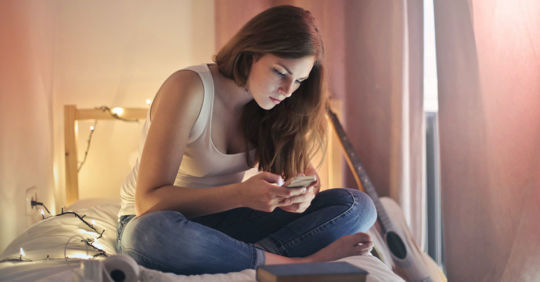 “She blocked me out of the blue.”

“We were back from a date, next day she’s gone”

“I woke up one day, and I’m blocked everywhere... What did I do wrong?”

We receive these readers’ complaints almost every week, and most of them seem to come from nice guys who’d been good to the girl.

So let's talk about it.

Why Did She Block Me?

Let’s face it; women are emotional beings, which is why the block is often unexpected. One day she feels okay about whatever is happening between you two, then something happens, she flips, and now she decides to block you.

But to be fair, not all men are angels. Some men deserve to be blocked forever for what they do. So make sure you check and see if you did something block-worthy before complaining, and if you’re still confused, then you might check some of the reasons why she blocked you for no reason.

She just realized you aren’t compatible

Some women carry no remorse for guys they don’t know well. So if she had one bad date with you or if you said something awkward to her on Tinder, then you might then expect a block with no warnings.

For example, if a girl blocks you after a boring date, then she wants you to never ask her out again. Stings, I know, but take it easy, learn from it, then laugh. Dating is risky because you put your personality on the line for a stranger to rate it, and part of taking risks is to be hurt sometimes.

You deserve a girl that doesn't just block you without a word. That's not a healthy relationship. A lot of guys don't have much success using dating apps because they aren't using the right ones. It's a very important decision since online dating has become critical to meeting single girls and you miss out on so many opportunities if you're not on at least one app.

If you're ready to move on to a healthier and happier relationship these are the apps that our team of dating coaches have seen regular guys have the best results with:

You did something terrible

In which case, are you really that surprised and thinking, "Oh no, she blocked me!"

If you did something kinda bad but not that bad, take a look at things from her perspective. Maybe you said something incredibly insensitive that she has no tolerance for. Or maybe you admitted to doing something that doesn't seem too bad but is a huge red flag for her.

A buddy of mine just had a terrible breakup after five years with a girl. She wanted out, and he cracked with anger, grief, and depression, so she blocked him everywhere to cut ties with him. And also...

Because you know some nasty stuff about her

He knew a lot of dirt about his ex that could've angered her new fiancé, so she understandably blocked him.

Always listen to your friends when they warn you about some girl. Since they’re out, they often get the bigger picture better than you.

She wants to move on

This often happens after the “Where are we” question.

You date a girl for a while, she gets attached and wants to be exclusive, so she asks for that.

But you say no.

When this happens, some girls will stay with you for a while and give you another chance. But at some point, she may realize there’s no hope and she's better off elsewhere, so she blocks you to move on.

Her new boyfriend wants you off the picture

I know girls who blocked every guy they knew on Facebook just cause the boyfriend said so. If this girl is easily controlled, then don’t be surprised if you wake up one day and she’s off-grid.

She was just using you

Don’t expect people to tell you:

“I’m dating you because I can’t find someone better”

“I liked you more when you were distant”

“I’m leaving in 3 months, but I’ll say I love you if it makes you feel better”

“I only wanted sex, but I said whatever you wanted to her just to get you in bed”

People want you to be bold with them but many of them won’t do it with you. We are all selfish one way or another. Some know how to control it, but most will block you instead of telling you the truth.

A girl may block you because it’s relieving. It takes the confrontation burden and throws it in the trash. She now doesn’t have to worry about your reaction when she tells you she lied, or was just using you to kill time. No one likes to look awful.

I recently matched with a girl on Tinder who turned out to be really dramatic. Things went so well we texted non-stop for a few hours and agreed on a date two days later.

The next day she texted something, but I was busy. So I just gave her a few short answers. I then forgot to re-engage her at night to spike up her emotions before the date (big mistake, but I wanted to sleep).

She blocks me for two straight weeks – to teach me a lesson maybe – then tries to re-engage later. But I hate the drama, so I brushed her off.

This might be your girl too. She blocked you for some silly reason in her mind that she can’t even put into words. In this case, you should be happy you dodged a bullet.

What to Do When She Blocks You

I highly recommend that you move on if she blocks you. See it like it’s the end of a bad movie and don't look back angrily thinking, "She blocked me!!!" Women rarely get back to a guy they dumped, so anything you’ll say or do will further hurt your dignity and make you look bad.

You will regret it later, and get angry, resentful, and with shaky self-esteem.

First, make sure it’s NOT a fake block

A fake block is when a girl restricts her new WhatsApp picture to a specific group of people that doesn’t include you. A girl will usually do this when:

You will probably text her to make sure she blocked you, and patching things up is what she wants.

If a girl blocks you on WhatsApp but not Facebook or Instagram, then there’s a decent chance it was just a move to manipulate you.

Go meet her (ONLY if you cheated or did something terrible)

If you’re the reason this relationship is over, then you should carry the burden of fixing it. Assuming this is what you want then you may try to contact your girl and see if things can’t get back.

Again, I don’t recommend this. People change after the breakup so you’ll probably get a worse version of her, if not now then later. Also, it’s much less exhausting to start a new relationship than to patch a broken one. Move on, call it a loss, and learn from your mistakes. That’s how it works.

If She Blocks You She Loves You: Is This True?

This sounds a lot like middle school dating advice, don't you think? Teenagers play these little games with each other, but it's not cute if a grown man does it!

If she blocked you, then she doesn’t want you. The only exceptions, as I said earlier, are when a girl likes you and you don’t like her the same way, or when she fake-blocks you. Either way, that sounds like a lot of drama right there. Do you really want a woman like that to fall head over heels for you? It sounds pretty exhausting!

She Blocked Me: How to Get Over Her

Once you get blocked by a woman, there's not much else you can do to try and get her back. Sure, you can try to contact her again by checking which apps she forgot to block you on. But that might just make you look desperate. Instead, your best course of action is to move on and never look back:

If a woman blocks you, think of it as a favor

A woman who doesn't want drama won't just block you out of the blue. There has to be some sort of motive behind it, and blocking someone is incredibly immature, especially if you had some chemistry beforehand.

A reasonable woman will either tell you it's not working out or she'll ask to be friends. So if she blocks you, it's a huge red flag saying that she's probably going to bring in more drama than you want in your life. Thank you, NEXT!

Out of sight, out of mind

You'll find it a lot easier to get over her if she goes no contact with you. After all, she already waved a huge red flag in your face and you can't access her socials anymore. That will make it easier for you to get her off your mind.

So what if one woman blocked you for no reason? She's not the only woman in the world who's attracted to you! With so many social media platforms and dating apps out there, it's so easy to meet other women. Get out there and start dating again.

And if you run into another woman who blocks you, treat it as no big deal. Why? BECAUSE IT ISN'T.