Sex is one of the most intimate things you can experience with a woman. However, when it comes to what happens afterwards, most men are often at a loss of words (pun intended). Considering how vulnerable both of you are, figuring out the right things to say after sex is important to either a) continue the relationship or b) nip any miscommunications in the bud that may lead to bad outcomes. So what do you say after sex?

In this article, we will take a look you should say after sex in different scenarios and what you should NOT say for the best outcomes. We'll talk about what you can say with girls you met on our favorite hookup apps for men for the first time as well as those you've been sleeping with for a while now.

These might be able to help you secure another tryst in the future or, if things weren’t as good as you had hoped, ensure that you at least part on good terms.

What Do You Say After Sex For The First Time?

The following are some of the best things to say after having sex with a woman for the first time: 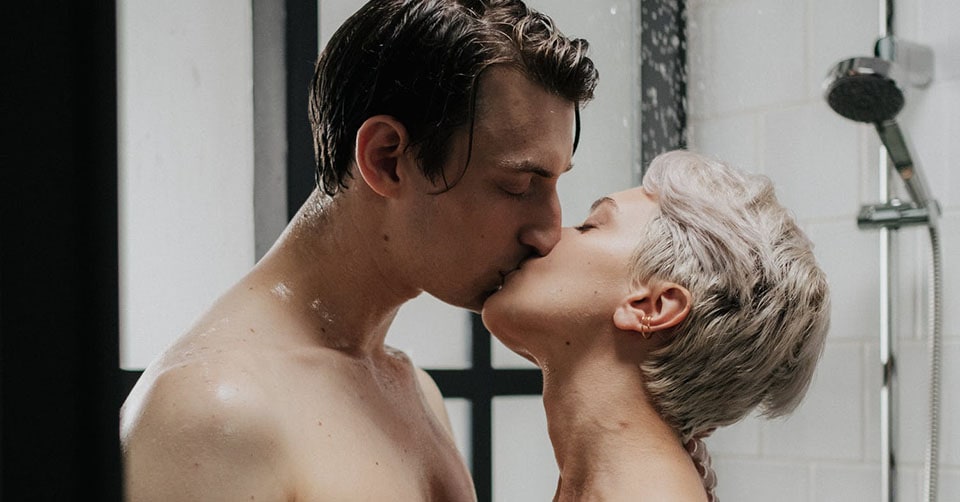 Let’s be honest: Sex can be a messy experience for both men and women. After exchanging fluids and sweating up a storm, taking a shower afterwards is a great way of prolonging the intimacy of the experience instead of laying in bed.

Bathing and showers are also a part of a good hygiene/grooming regimen and help prevent the spread of STDs. One of the most common STDs (and one of the most painful), a urinary tract infection (UTI), can be avoided simply by taking a shower to discourage bacteria from growing in the urinary tracts of men and women.

“Care for a cigarette?”

Nicotine has a relaxing effect after sex. For those who choose to partake, it can be a nice indulgence. There are also a few benefits to smoking or vaping with nicotine after a lovemaking session:

Rigorous sex works up quite an appetite, so it’s no surprise if either you or her are in the mood for a meal afterwards. Eating together is an intimate activity that further bonds one another together, so why not grab a bite to eat after you’ve had sex?

Here are a few reasons why this is a great question:

Making plans for the future

If your hookup is a quick one and you want to see your sexual partner again, it’s time to make plans.

In this scenario, keep things loose and non-committal. Don’t be demanding or try to persuade a woman you’ve just slept with about when you’ll see each other next time. After all, she may be busy, only wanted a single encounter, or there may be something significant in your life that you forgot about in post-sex glow.

Give her compliments about her body and how sexy she is, but avoid any serious talk or any social responsibility. She may also feel sweaty and gross, but act unaffected to show that you enjoy her just the way she is.

Remember, there are few things in life as pleasurable that you can engage in with another person besides having sex, so you want to ensure that she feels comfortable and happy with her decision to expose her body to you.

“How are you feeling?”

Women are emotionally based, so it’s important for men to check in with women they’ve just slept with to make sure her emotional state is positive. There are many reasons to ask this, as she may be having regrets or if something happened that caused an outburst.

Here’s an example from my life that shows the complicated nature of women and the usefulness of being a sensitive lover:

I had a girlfriend that would clam up during foreplay. It was strange, as she had initiated sex and taken charge (which is nice for a change). Instead of progressing to the bedroom, her dirty talk and pouncing on me suddenly changed into “Uhhh, I gotta go,” and she rushed to grab her clothing. Before she could leave, I said, “How are you feeling?” with genuine concern.

“Not good,” she replied as she got dressed.

“Ok, I just want to make sure you are okay.”

“Thanks. I’m just not in the mood. I hope you understand.”

This was beguiling and a bit frustrating, but I sensed that she needed some comfort. Later, I learned that she had been not only cheating on her devoted boyfriend at this time, but also weaning off heavy medication, both of which made her behavior increasingly erratic. Had I ignored her feelings, I might have been involved in some unnecessary drama and negative fallout.

Nothing says you had a good time than asking for another round of lovemaking. Depending on your health and excitement, the refractory period for young men usually lasts 10 - 15 minutes before you can get an erection for penetrative sex (and longer for older men).

From a woman’s perspective, it’s flattering to have a new partner that’s willing to be intimate immediately. However, depending on how tired or sore she is, she may not be willing. Nevertheless, she’ll appreciate that you still find her attractive.

Stare into each other’s eyes

Sometimes the best thing you can say after having sex with a girl is absolutely nothing.

No words are often necessary if you’re looking to pair-bond. Instead, stare deeply into her eyes and enjoy the moment. Once the good feelings begin to subside and the responsibilities of life come crashing back in, then it’s fine to start making practical plans or mentioning any of the other lines in this article.

Things to Say after Sex (for Hookups)

If you’ve hooked up with a new woman, it’s not uncommon to not know what to say. Depending on how you met or your prior relationship, the right words are difficult to find - especially if you’re not sure how she might react.

Let’s take a look at some of the best things to say after sex for hookups to help you either keep seeing her in the future or gracefully go your separate ways.

If you met exclusively on a dating app, it’s important to get easier access to her communication in the future from her phone versus a dating app.

Or, if you want to let her down gently after a lackluster hookup, rejecting her in bed is probably not the best idea. Instead, asking for her phone number helps give you an “out” once all of the dust has settled.

Not all hookups lead to a great outcome - even if it was a great time between the sheets. Sometimes you need to iron out the details and ensure that both of you are on the same page to fully understand how you should both act going forward.

Despite enjoying each other’s company, there are plenty of “buts” that need to be addressed:

What Not to Say After Sex

Now that you understand the answer to the question “What do you say after sex?”, you may be wondering what NOT to say after sex.

The following is a list of things you should never say but some guys often do:

In the previous section, we explored why you might just want to stare into each other’s eyes in silence. This is a great experience for fostering communication, but clamming up may put her on guard.

Men tend to be more silent, however, you’ll want to break the silence. Use one of the options in the previous section to ease the awkwardness.

“That was pretty bad”

Under no circumstances should you ever say to a woman that the sex you just had was bad. Even if it’s generally understood that the encounter was a mistake or that either of you was disappointed, pointing it out might get you kicked out or be the impetus for her to start rumors about you.

There are ways of approaching this and making it humorous. For example, if she had a severe muscle cramp in her leg that put a stop to your festivities, you can offer a leg massage.

If you’re sexually active with other women, it is not a wise decision to start talking about other women in the bedroom. Women will feel cheap or used, which in turn leads to negative outcomes and a sense of betrayal.

Imagine the reverse scenario, where she starts talking about all of her boyfriends - how would that make you feel?

Nothing sours the mood after sex than asking your lover if she has any diseases that you could have been exposed to.

There are a number of approaches to popping this dicey question before making love, but doing so afterwards usually leads to her viewing you as accusatory and irresponsible.

“Did we have sex last night?”

If you and she were drinking heavily before having sex, the truth is that you both may have blacked out. With gaps in your memory, she may be having regrets and anxiety about her behavior.

Worse, if she feels that you took advantage of her, there may be some serious consequences in your social circle - or even criminal charges depending on her account of the encounter.

Instead, just assume if you’re laying in the same bed that you did have sex and act accordingly.

By no means should you ever call her by the wrong name after having sex.

If you are unsure of her name, keep it ambiguous by just calling her a pet name. Or, as a pro tip, ask her how her name is spelled when putting her contact details in your phone. And if she confronts you on not knowing her name, own up to it by saying that you’re terrible with names or ask her if she remembers your name (she might be projecting).

Sex is a two-way street, so it’s up to you as a man to ensure that she’s a having good time. Even if something disgusting or uncomfortable happens (like her roommates knocking on the wall to make you pipe down), avoid blaming her at all costs.

Women often feel that just showing up for sex is effort enough and will avoid most types of accountability, so take on the burden if she’s in a bad mood after sex - even if it isn’t your own fault. Acting as a scapegoat helps preserve social harmony and will make it more likely that she’ll want to see you again in the future.

The next time you have an intimate encounter with a woman and you find yourself asking, “What do you say after sex?”, here are your best options. Granted, they might not be groundbreaking declarations of how amazing she is. But at least it puts her at ease about your encounter.