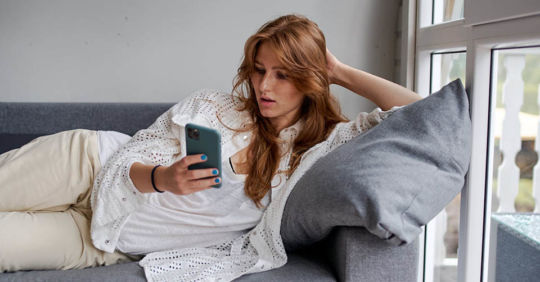 You’ve been having a pretty good text conversation for a while now. You’re past the getting-to-know-you stage, and you talk about other more interesting things. But suddenly, her messages have become shorter. She’s replying less and less. And suddenly, it’s radio silence. Is she ignoring you via text?

Few things are as frustrating as being ignored when you have no idea what you did. No one likes getting the silent treatment when she ignores you - and it can send your mind running off in all sorts of negative directions.

Before you come to any conclusions, you may want to stop and think. Her ignoring you may not be what it seems. In this article, we will take a look at what you should do if she’s ignoring you, whether you should ignore her if she ignores you, and what to text her to get back in contact with her.

Why a Girl Could Be Ignoring You

So, why would a girl ignore your text? There are a variety of reasons why a girl could be ignoring your texts - and some overlap. Here are some possible reasons:

It’s the 21st century and human beings in the Western world live complicated and demanding lives. Women are no exception. So if you’re not her first priority, don't take it personally. It might have absolutely nothing to do with you. Work, her social life, responsibilities, family, or something else - all of these things can leave her with no energy for men in her life.

She’s overwhelmed by your constant messaging

If you’ve been especially chatty via text, some women get overwhelmed with a wall of text every time they pick up the phone. Even if there was a lively back-and-forth and she expressed her feelings in-depth for hours, when she doesn’t respond - don’t respond. To give you a message to back off, they might not send a message at all.

Picking The Right App Makes All The Difference For Most Guys

Most guys that haven't had much success with dating apps struggle because they are clueless or pick the wrong app. The fact that you're here means you're leaning how to do things right but it won't matter if you're on a bad app.

These are the top apps for most guys that dating coaches are recommending now:

She’s got other irons in the fire

Some women simply have too many options when it comes to men. And you can easily get lost in the mix if you have multiple people vying for your attention. Try to imagine if the reverse were true; how would you react if you had ten women demanding your attention? Some women have even more!

She’s intimidated by you

Women can be quick to judge. Remember, women tend to be weaker physically than men and need to safeguard themselves from danger. You might have displayed some violent or unhinged tendencies, and she’s decided you’re too dangerous.

Or, you may be way “out of her league” in both senses of the phrase:

She lost her phone

This happens more often than not and is pretty self-explanatory. She may have lost your number until she gets a new phone. However, if she has other means to contact you and doesn’t, you might rule this out.

She’s creeped out by you

This can happen if she browses your profile and discovers something she doesn’t like. Or, you may have mentioned something that can be construed as a no-go in her mind - such as a dirty joke that went too far. Even if it is not true or you were just trying to get a reaction from her, the conclusions she draws can lead to her ghosting you for good.

If you flirt with a girl and she doesn’t reciprocate, this may mean she’s not interested and may not text back. No matter how hot and steamy the conversations may have been, she can flip a switch and see you in a new light as too sexually aggressive or demanding for her needs.

Remember, women tend to have two cycles during their dating years: the weeks around ovulation and the weeks when she’s not ovulating. Women who are ovulating or about to be tend to be more receptive to sexual advances; comfort is desired when she’s not in the mood. If you jumped the gun, she might not want to be involved with you. Vice versa, if she’s in the mood for sex and you’re more inclined to discuss the more romantic aspects of dating, it can equally be a turn-off.

Women need to know that you don’t rely on them. Men are supposed to enable women to operate in the world safely. After all, when she calls the police, she’s actually calling another larger man (or men) to keep her safe. As a comfort test, women will purposely give you a time period when they won’t answer every text, leaving you alone to see whether you’ll be chasing after her.

While some women love to spurn on a chasing male, she may be looking for a man who lives his own life and doesn’t rely on the ever-changing ways of a woman. If you fail this test, she’ll be a lot less interested in you.

Some women exist only in their own heads, believing themselves to be the center of the universe. This behavior is known as “solipsism”, and everyone is solipsistic to some extent.

Everyone else is a NPC (Non-Playable Character) and are meant to be exploited. You’ll see this behavior most commonly exhibited in Cluster-B personalities, where you can go in their favor from hot to cold, available to ghosted - seemingly over nothing.

If you notice this pattern, just remember that you’ve dodged a bullet and avoided a potentially manipulative person who may have ruined your life.

Should I Ignore Her if She Ignores Me?

Yes, the best course of action is to hold tight and continue your life as if she didn’t exist. Unless there’s an important matter at hand, like you left your keys at her house or someone you both know is in the hospital, it’s best to let her go about her business until she reaches out to you again.

Also, be aware that women deploy a number of tactics to entice men, some of which can be quite annoying and do the opposite. Just to give you an example, some articles advise women to ignore their boyfriends to make them miss them. There are plenty of other advice articles out there that basically say the same thing.

What you’ll notice is that these articles all address the idea that ignoring a man on purpose is a bad idea, but it’s mentioned in each of them. This means that it’s a common approach women will deploy.

Ignoring her is also empowering in some regards. If you notice that your emotional state is governed by the ping on your phone or you get a dopamine hit every time she writes a message, you may need to step back and give the relationship some space (even in the nascent stages). You may find that when you accurately assess the relationship, your initial judgment about her was clouded by the possibility of a loving relationship or access to sex.

What to Text a Girl that Is Ignoring You

To be upfront about this, if a girl is ignoring you, it’s best to text nothing. Wait for her to come back. However, if you want to press your luck and try to get her back on track, the following approaches can work:

Simply send her a simple “hey” and leave it at that. You can add “How are you”, but it’s basically implied. If she doesn’t respond, she’s not yours to pursue. Don’t send multiple hello’s, as this can make you seem desperate - and desperation is a turn-off.

Act as if she never ignored you

If she left your message on read abruptly, just send her a quick reminder as if the conversation never ceased. Some girls will pick up the slack.

And just as a reminder, avoid acting passive-aggressively. Don’t insinuate how distraught you were or talk about the pain that you went through. This doesn’t matter to most women, although they may feel a little bit of guilt that they screwed up another relationship in their life.

Don’t ask her why she is ignoring you

Addressing this creates a weird situation where she’ll never be in a good mood to explain her reasoning - and you may never get an honest answer. Instead, just assume the best and move on. While you may be looking for closure or some truth, she may not be ready to give it to you for all the reasons we described in the first section.

Now that you know what to text a girl who keeps ignoring you (and what not to text), it’s important to follow through. There's a fine line between messaging her again just to check up on her and looking needy when you text her. Don't be the latter!