The Conversation Signs She Likes You That Guys Need To Spot 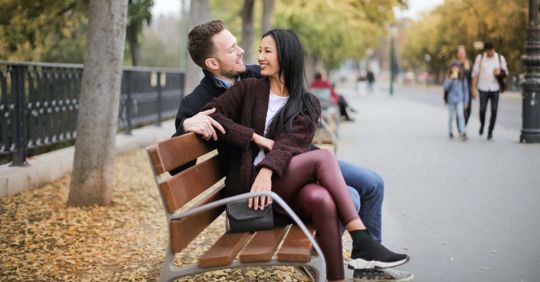 Women tend to be extremely subtle when it comes to showing guys that they’re attracted to them. If you don’t know how to spot the conversation signs she likes you, it’s highly possible that you’re going to walk away from a woman who would have loved to date you. Maybe you’ve already done this multiple times!

It’s time to learn how to make sure it never happens again.

You’re about to discover the subtle conversation signs she likes you that a lot of guys tend to miss. This guide also includes a list of non-verbal signs that a woman will show when she likes you.

12 Subtle Conversation Signs She Likes You

To figure out how to tell if a girl likes you through conversation, start chatting with her and take a look for these signs.

Be aware that a woman typically won’t add these elements into conversations with men she’s not attracted to.

1. She giggles a lot

Giggling is a common sign of nerves. So she’s either attracted to you or she’s nervous because you’re nervous. Either that or she thinks she’s in danger. Hopefully, it’s the former.

Also, if a woman is attracted to you, she’ll laugh at all your jokes, even your bad ones. Perhaps you want to try and deliberately tell bad jokes to get a sense of whether she’s attracted to you.

2. She’s louder and more animated around you

3. She makes an effort to keep the conversation going

This is perhaps the biggest telltale sign. A woman might politely answer your questions if she doesn’t like you, but she’ll usually make no conscious effort to keep the conversation going herself. If she’s the one asking you questions, that’s a solid sign that she’s enjoying your presence.

Most guys are so scared of the conversation dying that they don’t leave space for women to ask a question. If you can be brave enough to leave a silent gap for 5-10 seconds, you’ll quickly learn how much she really enjoys talking to you.

4. She asks deep questions about you

There are small talk questions, such as “Where are you from?” “What do you study?” “What is your job?” “Have you been here before?”

Women might ask you these questions just to be polite. However, if they delve into deeper more personal questions, that’s a clear sign they want to know you better. Most women will not do this unless they’re considering dating you. On top of that, if she remembers the tiny details you tell her about your life, that’s an even clearer sign of interest.

5. She tells you deep truths about herself

Again, this is something most women simply will not do, unless they’re interested in developing a deeper connection with someone. If she’s offering stories about her flaws, weaknesses or insecurities, she definitely trusts you - and it may well be that she’s attracted to you too. Here are some examples of deep questions to ask a woman.

6. She compliments your appearance

Most women will not do this for a guy they’re not attracted to for fear of him getting the wrong idea and hitting on her. Women tend to take a lot of precautions to prevent this from happening. So, if she compliments your appearance, she’s probably not “just being friendly”. More likely, she’s flirting with you.

7. A huge conversation sign she likes you: mentioning that she’s single

Once again, most women will not do this in conversations with men they don’t like. In fact, they’ll often invent imaginary boyfriends just to throw him off the scent. If she does have a boyfriend, she will barely/never mention him around a man she’s attracted to.

8. She makes a big deal of pointing out similar interests you have

If she wants to date you - and it turns out you have similar interests - she will make sure to highlight that and keep the conversation on that topic for a while. In a woman’s mind, this can be a good opportunity to bond romantically.

9. She introduces you to her friends

10. She tries to include you in group conversations

If you two are in a group conversation, she’ll often make a point of asking your opinion on the topic or telling the group that you have something awesome to say about it.

11. She uses innuendo or dirty talk: a conversation sign she likes you that you should NEVER miss

When women aren’t attracted to a man, they do everything they can to maintain an image of a pure and innocent lady. So, if she’s turning the conversation dirty - or responding well when you do - that’s a solid indicator that she likes you.

12. She mentions when she’s free

She does this so you can ask her out. If she’s really smart, she’ll ask what you’re doing at a certain time and mention that she’s free at the same time as you. While she may not be ballsy enough to ask you out directly, she’s desperately hoping you get the damn hint and ask her out at this moment.

Non-Verbal Signs She Likes You

Body language accounts for a huge percentage of human connection. So, there are plenty of non-verbal signs she likes you to look out for too. Here are 12 of the most common signs.

2. She stands unnecessarily close to you

She won’t be scared of bridging personal space if she’s attracted to you.

3. She touches you unnecessarily

If she’s giving you playful taps on the arm or leg or other unnecessary touches, that’s a surefire sign of attraction. You can be sure she’s not doing this to guys who she thinks are creepy or weird.

4. Her body language is very open

If she doesn’t like you, she’ll turn away from you and look elsewhere. She’ll often close off her body to protect her torso. If she really likes you, she’ll face you square on, with more open body language and a big smile.

5. She faces you in a group conversation

In a group conversation, she has the choice to turn her body towards anyone. If she’s facing you, that’s a subtle indicator of interest.

6. When someone tells a joke, she turns to see your reaction

This is a classic human psychology tip. When there’s a joke made in a group setting, it’s believed we instinctively turn towards who we like the most to see their reaction.

7. She plays with her hair

Another classic tip from the world of mainstream dating advice. Apparently, women play with their hair around men they’re attracted to catch their attention, reveal more of their face and neck...and of course to show off their sexy hair.

8. She crosses her legs

When a woman is standing crossing her legs, that’s an indication that she doesn’t plan to walk away soon. Another sign that she’s highly invested in what you have to say.

9. She glances at your lips

Men and women subconsciously do this when we want to kiss someone. She's probably imagining what it's like to kiss you.

Another sign of nerves. So, she’s either attracted to you, or your behavior is making her nervous. You might notice her frequently touching her hair, adjusting her clothes or playing with anything she can get her hands on.

11. She doesn’t tense up when you touch her

What’s more, she doesn’t back away when you enter her personal space. These are both signs that she’s attracted to you.

12. When she leaves, she says goodbye

When a woman leaves a venue, she’ll often find you to say goodbye if she likes you. This is to give you an opportunity to swap contact details or to leave with her. If she doesn’t like you that way, she’ll leave quicker, often without any warning or explanation.

What To Do When You See These Signs

If you spot any of these signs when talking to an attractive woman, your best bet is to flirt with her and try to make something happen. Sometimes, you'll have misread the situation and she’ll turn you down. But, that’s surely better than not making a move because you didn’t think she liked you!

Often, simply having the confidence to flirt and make a move on a woman will make you far more attractive in her eyes. Perhaps you’ll start to notice these verbal and non-verbal signs she likes you after you start flirting.