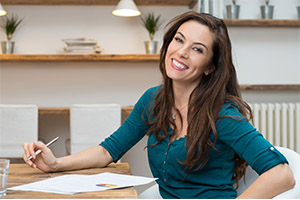 There’s nothing more exciting than flirting at work with a gorgeous woman. Sometimes, you may like a girl that happens to be older than you.

That could be because you have a preference for older women, have a particular woman in mind that simply fascinates you, or you're an older guy yourself looking to flirt with women his own age. The reasoning is irrelevant.

There are a lot of great places to meet women when you're off the clock (you can see our favorite places for meeting attractive older women here) but you're going to be spending a lot of time at work every week. It makes a lot of sense to put that time to use!

Here is how you can do it:

How You Should Be Flirting At Work With An Older Woman

It’s absolutely normal to find yourself attracted to older women and to have relationships with them.

Don’t believe what others may tell you.

Girls may shame your preferences for their older peers out of jealousy.

Other men may shame your choices because of their own insecurity.

So don’t listen to anyone.

If there happens to be an older woman at work that you’re very fond of, you have every right to flirt with her.

It would be a disservice to reject an older woman who likes you while you have similar feelings about her, simply because of an age difference or because you are coworkers.

In this discussion, we’ll go over 10 quality ways that young men can flirt with older women at work.

Flirting at work does not have to be complicated, and can in fact be quite easy.

You just need to know how to flirt with her correctly considering the circumstances.

Just know that flirting should be kept fun and harmless.

To avoid potential disappointment, you shouldn’t have any concrete expectations.

Though if you apply these principles, you may find that flirting with a girl at work will often lead to something more.

So with that in mind, let’s move on.

1 – Be social when flirting at work

Many guys seem to think that you should cut right to the chase with a woman you’re attracted to. While bold behavior certainly has its benefits, timing is crucial when it comes to flirting with women at work. So it could seriously harm your chances with her if you don’t play your cards right.

The best approach is to take your time. It’s important to be social with her without rushing the process. Talk to her about anything. Have lively conversations with her. Get to know her a little better without flirtation in mind. Get her laughing if you can, but focus on creating rapport with her if it’s not yet established. Being social will open up many opportunities to flirt with her; so don’t overlook this necessary step.

Before we get into some of the ways that will really spark the connection between you, we must remind you of the importance of talking to your other coworkers as well.

But the point here is, you want her to see you as a guy that gets along with everyone. A guy that has great energy and a positive attitude. Don’t single her out, because she would likely be less receptive to your future advances.

3 – Create your own inside jokes

Now that you know to be social with everyone, you still need to introduce some flair to the blooming relationship between you and her. What better way to do so than by creating an “us vs. them” mentality?

If you’re able to create your own inside jokes, you’ll amuse yourselves by poking lighthearted fun at certain things or people. Many women flirt by using inside jokes, so if you have some, you're one the right track.

Additionally, the best thing about inside jokes is that you’re allowed unlimited creativity. The more you talk to her, the more you’ll know what her sense of humor is like. As you grow closer to each other, creating your own antics should be a natural progression.

Everything up to this point assumes that she is being receptive to you. There’s no point in flirting at work with her if she only talks to you out of politeness. That’s why you should tease her.

Teasing can help her see you as a prospect for something in the near future. That’s because it elevates you from “social coworker” to “cool and intriguing coworker.” Teasing her frequently will help establish this connection. Don’t pass up this opportunity.

Where teasing will help her see you as an exciting coworker, touching her will cause her to see you as an attractive coworker. A woman cannot help but feel attracted to an exciting man that knows how to push her buttons.

Physical contact, when done correctly, is in and of itself an aphrodisiac. So while your touches may have very mild effects in this regard, they will increase her attraction for you. With that said, you must respect the workspace. You must be socially aware.

Even if she would welcome you briefly touching her waist, considering the work environment it would be better to touch her arm or upper back. Also, do so casually while you’re talking. Your touches should always feel natural. Perhaps just a bit beyond how you would touch a female friend you were comfortable with.

Lastly, there’s a reason teasing comes before touching. If she likes your vibe and enjoys your company, which you’ll know based on how she acts around you, touching will naturally be the next step.

It’s important to excite her and incite a physical connection. But it’s also essential to establish a bond that goes a little bit further. That’s where complimenting her comes in.

While complimenting her on her appearance has its place, it’s better to focus on her personality first. Considering that you’re coworkers and that you still haven’t escalated beyond that just yet, it’s better to stick to the basics for now.

Flirting at work becomes easier as you become more comfortable with each other.

Actions speak much louder than words. That’s why you have to listen to what she says and determine why she is saying it. If you just go in and try to spark attraction without listening to what she says, you're committing one of the biggest flirting mistakes.

More specifically, identify the context behind her words. Most of the time your conversations will be filled with workroom talk or playful banter between you. The latter is obviously what you should focus on. Moreover, sometimes she will suggest something to you without saying it directly, which may indicate that she wants to go out with you.

8 – Find out how much she likes you

You need to have an idea of how much she likes you. Particularly how receptive she is to you. If she’s constantly smiling or laughing around you, if she asks you constantly what you’re up to, if she touches or teases you in return–then you have a woman that is highly interested.

If your vibe with her has been playful, the following exchange may be worth a try:

You: By the way, I really like you. (Say this while in conversation with a serious expression.)

You: (Pause.) I was actually kidding, but it’s good to know how you feel about me.

As long as you’ve been teasing and touching her in subtle but effective ways, you’ll ensure that she sees you as an exciting coworker, as opposed to a friendly acquaintance.

9 – Tease her on her immaturity

This point may just be icing on the cake. It’s not necessary to tease her on her immaturity, but since just about all women are immature to a certain extent, it’s an opportunity for teasing that should not be missed.

Tell her during a lively conversation that you’re amazed by how much she acts like a little girl sometimes, even if you're flirting with an older woman.

Be ready for this response, “What do you mean!?”

The more you practice your teasing, the better it will get. This point has an added bonus of belittling the age difference between you. Tell her how much it amazes you that even your younger sister or cousin is more mature than her.

10 – Suggest plans based on a common interest

Lastly, flirting with her needs an added purpose besides having fun with an attractive older woman. You should suggest plans based on a common interest. A date idea if you will.

As long as you don’t make a big deal about it, she won’t either. Invite her to a yoga session, or go for a hike on the weekend together. Go wine tasting. Or, just meet at a bar after work or on the weekend for a drink and hang out. From that point onwards, your flirting will potentially lead to something more.