Should You Hug On The First Date? The Rules You Need To Know 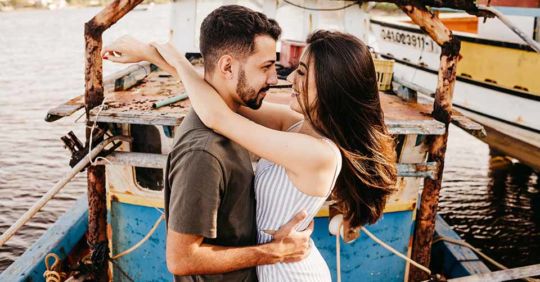 Wondering whether to hug on the first date? If you’re reading this, it’s safe to assume that you want to do this - and maybe even go further.

The problem is: the boundaries of physical touch on a first date are always blurred, as every woman you meet is likely to have different levels of comfort.

Thankfully, there are a few rules that you can follow to always understand how comfortable a woman is being physical with you. By following these rules, you’ll be able to consistently judge how far a woman is willing to physically go on the first date. We’ll take a closer look at how you can do this in the article below.

More importantly, we’ll take a deeper answer to the question of “should I hug her on the first date?” Plus, you’ll find some tips for hugging her in a way that’s not the least bit awkward.

Should You Hug on the First Date?

As a general rule, you should always try to hug a woman on the first date.

In fact, you should initiate as much physicality as you are comfortable with. In any courtship, it’s the job of the masculine to lead and the feminine to follow.

Most women will be too shy to initiate touch on the first date or they’ll feel like they’re being easy for doing so. On top of that, they’ll want a man who is brave and assertive enough to make the first move.

With that said, it’s also important to respect a woman’s physical boundaries. You need to escalate at a pace she’s comfortable with.

If you attempt a hug on the first date and she tenses up, that’s a clear sign you’re moving too fast. In this case, you need to stop hugging her, spend more time getting to know her, then try again later.

Physical contact is an important part of flirting with a girl, not least because it gives you an idea of how comfortable she is around you.

For example, if a woman tenses up during a hug, you now know it’s a bad idea to kiss her or try any other risque physical flirting. If she embraces you fully during a hug, that’s a sign she is ready to get even more physical with you.

Light and playful touches are an important part of flirting. Without them, a woman will often feel like you just want friendship and nothing more, even if you’re flirting verbally.

Hugging is one of the first physical milestones you want to reach on a first date. Once she’s comfortable hugging you, try testing if she’s receptive to holding hands, playful squeezes on the arms and legs, whispers in her ear, getting into her personal space, etc. If she’s happy for you to do all of this, there’s a great chance she’s ready to be kissed.

If you don’t go for a hug or any of these other flirty touches, you’ll have no idea whether she wants to kiss you, nor if she’s ready to go back to your place to be even more intimate.

Hugging is essentially the first stepping stone to all of the great physical intimacy that comes with a long-term relationship. And, even if you are looking for a serious girlfriend, your best bet is to try to engage in hugging and other playful physical touches from the offset.

It doesn’t make you a gentleman if you refrain from touching your date at all on the first meeting. More likely, this will make her think that you’re either not attracted to her or too cowardly to make a move. Neither conclusion will inspire her to accept an offer for a second date.

Physical touching, including hugs, are a great way to spark a romantic connection. They also show that you are, in fact, confident enough to make a move on this woman. So, if you’re on a first date, it’s essential that you at least try to do this.

How to Hug on a Date

Are you worried about a hug being too awkward or badly-timed and making the date worse?

While it’s unlikely to derail a date that was initially going well, it is certainly possible for a hug to be awkwardly executed. The key to a smoothly executed hug is where you’re both positioned.

That’s one of the many reasons why fancy restaurants are bad choices for first-date locations. You’ll almost definitely be sitting opposite each other with a table between you, meaning you’ll both have to stand up to hug and it’ll be difficult to engage in any organic playful touches.

You’re better off grabbing drinks in a bar that has a booth or sofas where you can sit next to each other.

Other awkward places to hug include: when you’re sitting next to each other in the car and after any sweaty sports activity. Thankfully, there are plenty of ways to make sure your first hug goes smoothly.

Here are six tips to make sure it happens without making any mistakes during your date.

These ideas are all virtually foolproof as long as you own it without hesitation.

If it seems completely natural and not a big deal for you to hug on the first date, it’ll usually feel the same way to her. If you get nervous about it, she’ll feel that and become nervous herself.

So, believe in yourself! Not only with your hugs but with everything you do on the first date. A guy who is confident and assertive is attractive to most women.

With that said, it is also important to be aware of her body language. If your date tenses up during the hug, take that as a sign she’s not yet comfortable with that or anything more intimate.

It’s not the end of the world if this happens, it just means you’re moving a little too fast. So, stop hugging her and carry on with the date as if nothing happened, then try again later. Maybe, as the date continues, she’ll become more comfortable being physical with you.

A hug won’t make or break the first date either way, but it’s a nice way to show your affection and give you a good idea of where you stand with this woman.