Why Guys Like Crazy Girls in 2023 (Plus Warning Signs) 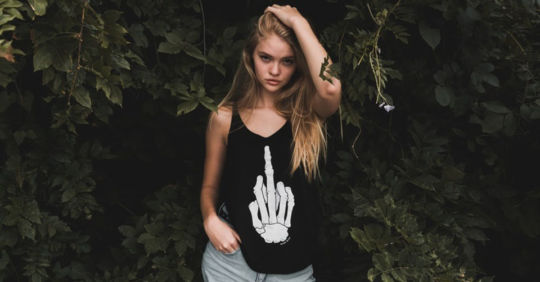 Why do guys like crazy girls? Maybe over the past several years, you’ve gotten one crazy girlfriend after another—toxic, unstable, or just plain insane. The relationships are stressful and emasculating... but for some reason, you still keep ending up with crazy girls. Or worse: Maybe you’re stuck in a relationship with a crazy woman right now, and you have no idea how you got here and what you should do.

Does any of that sound familiar?

Hey, I get it. There’s something about wild, crazy girls that’s so irresistible and addicting. But what exactly is it?

And more importantly: How do you break free from a crazy girl’s control and regain control of your life and happiness?

This article has all the answers and more. If you want to escape a crazy woman or avoid them from now on, and instead start attracting the kind of women who will love, support, and care for you no matter what, then read on.

So what is it about crazy girls that are so irresistible? Depending on who you ask, you’ll get a bunch of different reasons. And yet they all seem to boil down to five big ones.

Which of the following do you agree with?

Relationships with crazy women are wild emotional thrill rides. And just like rollercoasters, they’re fun the first few rounds, then nauseating later on. But for some reason, you feel the urge to get back on the ride one more time.

Are you settling for crazy girls because you can’t seem to get the kind of women you really want? This is one of the top reasons why guys like crazy girls: the feeling that she’s the best they can get.

If you are, you’re not alone. It’s a side effect of the systemic emasculation going on in society today. We men are not allowed to be ourselves, and because of that, we miss out on women who would have been perfect for us.

And so, we’re left with the crazy ones.

Crazy women are prone to “love-bombing” their men. As the name suggests, she bombards you with love and affection, and it’s easy to get addicted to it.

Of course, the love-bombing alternates with the nasty coldness, gaslighting, and mind games—so in the end, it’s hardly worth it.

Maybe you’ve been in a relationship with a regular, not-crazy girl before and you found it boring. Then you got into one with a crazy woman, and you liked the intensity of its ups and downs. And so you’ve never looked back since.

If you’re reading this article, though, it means you’re getting weary of the intensity. That’s normal, as well.

This is perhaps the most common reason why guys like crazy girls. Crazy women tend to be wild in bed. And if you’re a normal, healthy guy with lots of libido, it’s almost impossible to get enough of it.

So why do guys love crazy girls? These are the top five reasons.

As tempting as they might be, the wise old saying still applies: “Don’t stick your dick in crazy.” Especially if you don’t want long-term stress and lasting emotional trauma.

So how can you tell if she’s really crazy? That’s up next...

Luckily for us, we know by now how to spot crazy girls from a mile away. Simply look for any of the following seven signs. If she shows two or more signs she’s crazy, think twice about starting any romantic relationship with her:

I hate to say it, but if she has kids whose daddy is (or worse, daddies are) not around, stay away from her. Single moms are heroic individuals and should have all the help and support they need. That said, if you want a normal relationship, you’ll have a better chance with women who haven’t gone through the trauma of getting jumped then dumped.

While not all single moms are the crazy type, many are. They’re jaded from their past relationships, probably have had bad childhoods, and bring a lot of emotional baggage into the relationship. Again, they should get all the help they could get, but you don’t want to be the next guy in her life who comes in, reaches his limit, and gets out.

You might have noticed that when she talks about the people in her life, almost every single one of them seems to have something against her? She might even also complain about how strangers mistreated her or looked at her funny during the day.

When she thinks everyone hates her, it’s a bad sign for several reasons:

She’ll be extremely hard to please, and a relationship with her will be difficult and toxic.

It’s almost like she thinks of nothing else. She’s in touch with you almost every hour of the day and gets upset when you take too long to reply to her text. She frequently gives you the silent treatment to “teach you a lesson.” And when she gets wind of you talking to another girl, she flies into a rage.

Her obsessive attachment is an issue you can’t solve by getting in a relationship with her. After all, you’re the trigger of it. So it’s best to stay away from such obsessive women.

By “nuts,” I mean groups, ideologies, and movements that are naturally confrontational. Militant feminists, hate groups, activists, and political fanatics might come to mind.

Now, I’m not saying if she belongs to any of these groups, she’s automatically nuts. All I’m saying is that as long as she associates with groups that actively seek conflict, she’ll bring those habits into your relationship. And no, it won’t be fun.

This comes in two forms. First, she blames and complains excessively about anything and everything. It’s like everything’s other people’s fault, and none of it is her responsibility. Spoiler alert: There’s no making her happy.

Secondly, she might be the type who tries to manipulate, guilt-trip, or gaslight you. And when you call her out on her behavior, she plays the victim card and makes it look like it’s all your fault.

Either way, in a society that glorifies victimhood, this is a situation you can’t win. So let’s not get into it in the first place, hmm?

...and to the barista, the retail employee, and the tour guide. You see her raising her voice at servers and bossing them around, obviously trying to show how she’s “above” their station in life.

This tells you how easily and how badly she’ll turn on you when she’s displeased in any way. Now imagine spending the rest of your life with such a woman. Not a good deal when you know other women will treat you infinitely better than that.

When she tells you this, it means she has an unhealthy view of other women, whatever that view might be. She’s distancing herself from other women, dissuading you from associating her with them.

Also, when she tells you she’s “not like other girls,” it most certainly means she’s trying to gain your approval. She’s subtly trying to make you like her more than the other girls in your life.

That obviously means she’s attracted to you, but stay on your guard. Check for the other six signs before even considering getting romantic with her.

Why You Like Crazy Women & How to Avoid Toxic Women

So by now, you’ve probably noticed that very few crazy women are actually suffering from psychological issues. Instead, most of them have at least one unresolved issue in their lives:

As sad as it might be, the fact remains: Relationships with “crazy” women will be stressful and emotionally scarring. Their underlying issues require professional help to treat. Unless you’re qualified to do that, you won’t solve her problem.

And lastly, what if you’re already stuck in a relationship with one? If she’s not willing to see a professional about her issues, then it’s best to end the relationship. Trust me when I say it’s only going to get worse. Break free and get your life back together.

If you decide to stick it out, then more power to you, my dude. Here are some parting tips to help make the journey better:

So good luck, stay safe and remember to always put yourself first—whether she’s crazy or not.