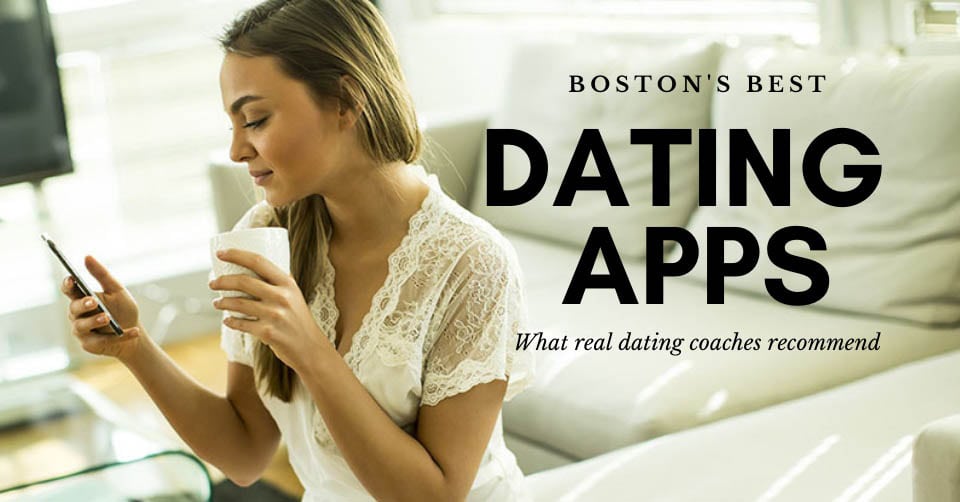 Finding the best dating app in Boston for you is no easy task. Everyone’s dating online around the city these days and it's pretty much a requirement if you're under 50. Along the East Coast, the trend is especially pronounced.

For locals, dating is often a digital affair, but knowing which Boston dating apps to use is key. Just like bars and nightclubs, dating apps go in and out of fashion. Getting in the right one is crucial. But just like clubs, sometimes as soon as you hear about the next hot app, it’s already out of style. So just what are you supposed to do?

First, you need to make sure the dating app you’re using is location-specific. With a population of nearly 700,000 residents, Boston is a great place to date. From West Roxbury to Mission Hill, singles are looking for love, romance and a lot of fun. Many times, though, you get on a site and people pop up from all over the place – from Lowell to Taunton. This is because these sites want to pump up their numbers.

But Boston already has it all when it comes to dating. There’s no need to leave the city. With Harvard and BU right here, there’s a young and vibrant scene. Downtown offers loads of date-night options and most singles expect one date a week, minimum. After all, dating is a numbers game.

These are the best dating sites in Boston that you have to try:

#1 - Dine (Android; iOS) is the best dating app in Boston for foodies

Dine is for the Food Network fanatics out there. If you spend a lot of time thinking about what your next meal is going to be and what new restaurant you should try this is the best Boston dating app for you.

What makes this app great is that it removes the stigma of the traditional "dinner date". Instead of your date being some awkward interview Dine helps you meet people that actually share your culinary interests. The whole idea is that you can meet other singles, try out new restaurants, and actually enjoy dating for a change. It works and it's definitely one of the most fun dating apps in Boston.

Why Dine is a great dating app in Boston

#2 - eHarmony (Android; iOS) is the best app for long-term relationships

eHarmony has consistently been THE go-to app if you want a long-term partner in Boston. We've all seen the commercials and heard about friends that have used it. The reason it's so well known is that it just plain works. If you want to find someone that you click with for a while it's really hard to beat.

When you have tens of millions of members there are going to be some successes. However, when 3 out of every 4 marriages that begin online start with your app you're doing something right. Getting set up definitely takes some time (they ask a lot of questions) but that's what it takes to understand what you're looking for. When you're looking for quality over quantity this should be the first app on your list.

Why eHarmony is a great Boston dating site

#3 - Bumble (Android; iOS) is a great experience for the ladies

Bumble has really turned dating on its head. Instead of men taking the lead by messaging first and asking women out it's completely up to the ladies to make the first move. It leads to a VERY different dynamic.

A lot of women in Boston have been using Bumble after they've given up on Tinder and the other "new" dating apps. They get tired of being deluged with messages from every single guy out there and prefer to only get contacted by guys they're interested in. It's a very different experience and one that works for a lot of people out there.

Why Bumble is one of the best dating apps for women

#4 - AFF is the best hookup app in Boston

AFF (which has a great free trial) has been around for longer than many apps but still has a surprising number of people in Boston using it (any over 50 million total). This is the best hookup app in Boston right now. It might not have the most beautiful app out there but it consistently works better for guys than any other app we've seen when you just want to jump into bed.

Unlike other Boston hookup sites (we're looking at you Tinder) it's all about meeting up and actually heading to the bedroom. It skips a lot of the dating formalities and encourages it's users to get to the fun part. If Tinder has been great for you, and it isn't for most guys, AFF can actually help you find what you want. If you want the best hookup app in Boston you've found it.

Why AFF works so well

#5 - Tinder (Android; iOS) is the Boston dating app that won't go away

Tinder.com has morphed into more of a general dating app these days and is still very popular. Where once it was focused on short-term fun now it's practically like every other app. If you don't know any long-term couples that met on Tinder you need to get out more.

We've had pretty mixed results with Tinder, and so have many of the guys we know. Great-looking guys will do really well but guys who are less put together tend to struggle. Since Tinder is all about the photo it can be hard to get noticed if your's aren't up to par. What usually happens is the best lookign 15% of guys get 75% of the attention which is not a great experience for those of us in the bottom 85%!

Why Tinder is a dating app worth trying

Coffee Meets Bagel might be the perfect app for you if you're too busy to date but still want to put yourself out there. It's the best Boston dating app if you want to do the absolute minimum and still see some decent results.

The way it works is that you get a small number of matches every day and have a certain amount of time to message before they expire. You don't have to spend a ton of time scrolling through profiles and you don't have to respond to a million messages a day. It really is dating at its essence.

We were pleasantly surprised with the matches we received and just how little time we had to spend using the app. When you're super busy and not necessarily looking for Mr/Mrs. Right it's a good option.

#7 - The Inner Circle (Android; iOS) is the best dating site to get off your phone

The Inner Circle is the dating app the works hard to get you off your phone and into the real world as quickly as possible. Where a lot of the Boston dating apps you've heard of are basically video games you spend hours using, The Inner Circle wants you to put the phone down!

It's actually a pretty refreshing experience. They run a lot of events and have several features on the phone that help you get out of your house and in front of other singles you might be interested in. A lot of their events have been out of commission lately but that will change eventually. It's certainly worth a download if you need an excuse to get out of the house.

#8 - Kinkoo (Android; iOS) is for those who have a wild side

Kinkoo is the app specifically made for those who have some very particular kinks that they really want to express. It can be really difficult to find like-minded people out there and Kinkoo wants to be the solution. If that sounds like you, you've found the best dating site in Boston for your particular tastes.

We have to say, it's certainly one of the most diverse apps we've seen in terms of users. There is a shocking variety of interests out there and this is a great app for many of them. If you're connecting with what I'm saying here it's definitely worth checking out.

Why Kinkoo could be for you

HeyBaby makes it easy for single parents around Boston to connect. With so little time in the day to spend on yourself when you're a single parent an app like HeyBaby can actually make having a love life realistic.

We really like how focused it is on the various challenges of being a single parent and helping users find other family-oriented singles. It's not just for single parents, people without kids can use the app as well, but everyone on the app wants children.

If you've spent any time on other options, even some of the best dating apps in Boston that we list above, this will be a different experience for you.

If you are looking for more great guides to finding the right dating apps check these out:


Where Single Girls in Boston Are Looking For Guys in 2020 ,

The Proven Options To Find and Meet MILFs in Boston We Recommend ,

The Expert’s Guide to Meeting Cougars in Boston in 2021 - Where To Go And How To Date Them ,

By James Anderson
Dating Expert
James Anderson is a Dating and Relationship Coach for BeyondAges.com. He has many years of dating and relationship experience with older women of various ages and loves helping other men and women find success.
Join Our Newsletter For Exclusive Dating Tips & Advice