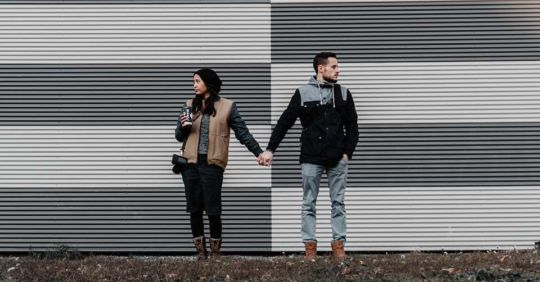 You’re probably wondering, “Why would I want to know how to end a conversation when I’m clearly into someone?” Well, there’s more to attracting a woman than just keeping the conversation going. So hear me out.

Have you ever had a conversation with a girl where you’re both laughing and having a good time, she’s clearly into you, she laughs at all your jokes. But the next day, she suddenly loses interest?

Yes, it's painful (and annoying). But there’s a reason this happens even if you have excellent conversation skills. Knowing how to start and carry a conversation with a girl is essential, but it’s only one piece of the puzzle. It’s equally important to know how to end a conversation and make her want you more.

Why Do You Need to End a Conversation the Right Way?

It’s essential to leave a conversation the right way because it increases the chances she will want to see you again.

So while it's good to have a fun, exciting conversation about the weather, her opinions on pineapples on pizza, and her favorite emo-punk band of the early 2000s, you also need to know how to make the best last impression.

There are a lot of things you can do before you end the conversation to keep a girl interested in you, long, long after you’ve stopped talking.

But before we get to that, we need to set the stage to implement these tips effectively. Without the right ingredients to create the perfect stew, no “end the conversation the right way” technique will help if the following fundamentals aren’t in place.

So make sure you check all the below boxes before implementing any strategy.

The Pre-Ending the Conversation Checklist

You don’t want to end the conversation at “I’m doing okay, thanks.” So here’s what you need to keep her mind on you.

Follow the golden rule: be attractive; don’t be unattractive

Everything sorts itself out when you’re an attractive person. And you can learn to be attractive. And we’re not talking about winning the genetic lottery here. It’s not that hard to elevate your attractiveness even if you weren’t born with conventionally good looks.

By being attractive, girls will naturally want to carry the conversation forward, relieving you of the pressure to carry the weight of the discussion on your shoulders.

Stop being boring (or the corollary: be more interesting)

Ending a conversation without a fun, exciting chat is like skipping foreplay and having the most boring climax ever. You’ll both miss out on the fun, and it’s a lose-lose situation overall.

Girls love a guy who is exciting and can hold an interesting conversation. Nothing turns off a woman faster than dull small talk.

Here’s an example of a boring text conversation:

You: Nothing much. How was your day?

Her: It’s okay; I was watching Netflix all day.

You: I loved the first season soo much. Which season are you on?

Girls get plenty of texts from guys who text her just the same way - and they’re bored of seeing the same old, same old.

You: Hey, Robin (a reference to HIMYM)

You: Haha, come to think of it, you’re more like a Lily.

Her: No way! What makes you think that?

As you can see, this conversation is playful and fun, and the girl bit her teeth into it. So make sure you know how to talk to women in person and keep the conversation fun over text. Make sure you already have some playful chemistry when you’re learning how to end a text conversation.

Be willing to walk away

Girls LOVE a guy who’s willing to walk away.

Because it shows that the guy has high self-esteem and won’t bend over backwards for her. An attractive man will walk away if he finds the girl's behavior unattractive, no matter how hot she is.

And women this. Few guys walk away from girls, and a man who does so is very intriguing.

Think about the following scenario:

Two girls are talking to you, both of equal attractiveness. One of them is clearly smitten by you, and she shows you a LOT of interest. Let’s call her Samantha.

On the other hand, Rachel is talking to you, but she's not head over heels for you. You can sense that she’s still evaluating you. At some points in the conversation, she seems to like you, and at other times she seems to lose interest.

The mystery keeps you wondering, what’s going on in her head? Unbeknownst to you, your subconscious plays the game she loves me, she loves me not.

And where’s Samantha in all this? Samantha who?

The reason you’ll find Rachel more attractive is that you sense she’s willing to walk away.

Being able to walk away is one of the most potent sexual attraction techniques in your dating toolbelt.

Here’s a fact - the more a girl chases you, the more she will get attracted to you. This follows a basic rule of psychology, the more you invest in something, the more you get invested in said thing.

However, having the mindset is easier said than done. A couple of things will help you in this regard.

How to End a Conversation and Make Her Want You More

Okay, now that we laid the groundwork, let’s talk about how to end a conversation to make her want you more.

End the conversation on a high note

The important thing to keep in mind is to end your exchanges with a girl on a high note. Never end the conversation when it fizzles. End it when she LOVES the conversation and wants more of you.

Why does this work?

Have you ever had an amazing cake, and while you’re about to have your last bite, your annoying friend snatches it away from you? (No? Maybe I need to change my friend circle!).

In the above scenario, do you think you’ll be able to forget that cake anytime soon?

The same principle is at play here. When you leave the conversation on a high note, the girl will be thinking about you all day (or possibly week), wanting more of you.

This slightly sinister technique is more suited to ending a text conversation, but it works like a charm.

Go cold on the girl while texting her (end the text conversation on a high note). This works because the girl is suddenly left wondering why you vanished. You were having a great conversation, so the sudden disappearance is going to baffle her.

She’s going to wonder, “Did I say something wrong for him to leave? Did he not like what I texted?”

Remember, though, that this technique won’t work if she’s not sufficiently attracted to you.

Of course, I don’t recommend this tactic as it encourages game playing, but it's good to keep this in the back of your mind. Just in case.

This is one of the most powerful techniques you can use in your conversation. Future projection involves painting a rosy future with the two of you as romantic protagonists.

An example of this would be:

Her: I’m going to Spain tomorrow.

You: Oooh. I want to come as well. (Playfully) You should take me in your suitcase.

Her: (Playfully) What if they find you when they scan my bags?

You: (With a smirk) I’ll let them know you kidnapped me and ask them to arrest you.

This is an example of how you can use future projection. By painting a picture of you and the girl together (no matter how silly), it makes her think of you both as a couple.

If you use future projection at the end of a conversation, she will be genuinely curious about what sort of future you’ll have.

Screen and qualifying her

Screening a girl is another powerful technique to add to your “how to end a conversation” toolbelt. (With all these tools, you’re going to convert yourself into a dating Batman).

An attractive man doesn’t just fall for any girl. He looks for traits he’s attracted to. If he likes intelligent, adventurous girls, he won’t waste his time on women who don’t exhibit such characteristics. He has standards.

Girls sense that this man is different. The other guys only want to talk to her because she’s pretty.

These girls will then try to qualify themselves to this attractive man by showing off their intelligence and adventurousness.

Acknowledge and appreciate her for those qualities when she shows them to you; she’ll feel cherished. And she’ll want you more.

So how can you build a connection?

Talk about things you wouldn’t share with other people. When she sees that you’re vulnerable and opening up, she’ll do that too. People who share their deepest experiences become close and form a bond.

Ending the conversation with a solid connection will make her think about you long after you’ve left her.

And that’s it! Once you’ve implemented these tactics, techniques, and principles, don’t be surprised if you get many girls texting you and asking you to meet them up. These tips are that effective.