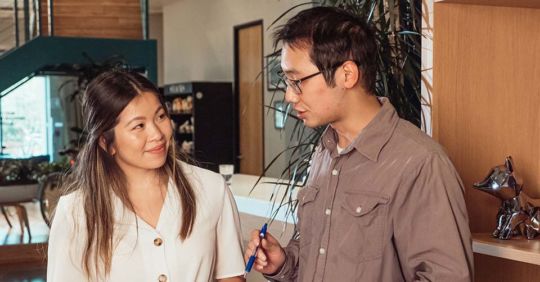 “Should I be worried that my girlfriend is talking to other guys, especially when I know they want to be with her?”

If she is serious about you, she will make it very clear to the other guys that she is no longer available and you are her boyfriend. Sometimes it can be okay for your girlfriend to talk to other guys. But I do have to warn you, more often than not, it isn’t a good sign.

You don’t want to turn into a needy, insecure boyfriend who tries to manipulate and control his girlfriend so she doesn’t trigger your insecurities. She will just lose respect for you and become more attracted to other guys. But you still need to know when to draw a line…

If your girlfriend is making you feel disrespected or blatantly giving mixed signals to other guys then it’s definitely up to you to stop it, especially if you have been dating for more than a few months.

I will show you actually when you should and shouldn’t lay down a boundary and also how to let her know you are not happy with her behavior without coming across as super needy or jealous. But before I do… let’s look at why your girlfriend is talking to other guys in the first place.

Why Is She Talking to Other Guys?

You're in a relationship with a girl you love.

Now imagine how hard it would be to put an end to all that ego-boosting validation because you are in a relationship. Tough right? Even if you had no intention to cheat on your girlfriend.

It’s the same for women. She is probably loving the attention she is getting from other men even if she wants to be with you.

You can’t hide your girlfriend away from the world forever because you fear you will lose her. You can’t control who she does and doesn’t talk to either. But you can control what you do and don’t tolerate in a relationship.

You don’t have to put up with bad behavior to be in a relationship with a beautiful woman. But you’ve got to be willing to walk away if the other person continues to act against your values.

If you start to see that your girlfriend is talking to other guys, you need to know what is okay and what is not okay.

It’s normal for your girlfriend to talk to other guys at work, university or if the guy has been good friends with her for a long time. Why? Because there is a practical reason for them to be talking to each other.

Just like it is okay for you to talk to other women at work, university or your good women friends. These interactions are usually just social and platonic with no sexual tension or innuendoes.

But in most other interactions, your antennas should be up. 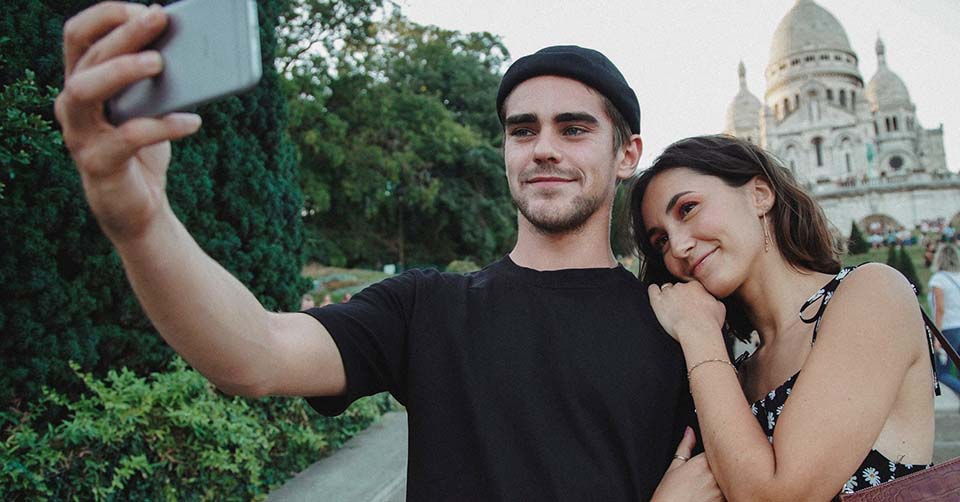 Talking to another guy doesn’t equal cheating. It’s even okay for your girlfriend to find some other guys attractive. Initial attraction isn’t a choice. Even though she might feel some attraction to other guys, it doesn’t mean she’s going to dump you or start hooking up with every guy she finds attractive.

If your girlfriend is a self-respecting, trustworthy woman who doesn’t give you a reason to doubt her commitment to your relationship, then you have nothing to worry about.

However, if she is flirting with other guys and sending them mixed signals when you're in a relationship then it is a problem. If it is the early stages of your relationship, then I wouldn’t worry too much. But if you’ve been dating for a few months and you are serious about the relationship then you need to draw a line and stand up for yourself.

Your girlfriend is talking to other guys on Facebook already and for the most part, it is okay. Facebook is a way for her to be social and friendly with other guys from work, college, childhood friends and other family members.

But what if she liked the last 12 photos of some other good-looking guy and he is liking her photos back and maybe even sliding into her DMs?

Well, it comes down to what you will and will not tolerate. Personally, I would not tolerate my girlfriend constantly liking other guys' photos and vice versa as I would consider this back and forth flirting.

I definitely wouldn’t tolerate other guys constantly sliding into her DMs unless he was a family member, longtime friend or if it was a practical message related to work.

I have been in a relationship with my girlfriend for over 5 years now. She is very clear about what type of communication I will and won’t tolerate. And she knows if she continually broke my boundaries then I would be willing to walk away from the relationship.

Should You Be Jealous if She Is Talking to Other Guys?

Jealousy is a normal human emotion. There is nothing wrong with it. In fact, I would say it’s inevitable that you feel jealous from time to time. It is unrealistic to believe that life should be only positive all the time. We’ve got to learn how to deal with unwanted, uncomfortable, and perceived negative emotions too.

The problem is when jealousy turns into anger or threatening behavior towards your girlfriend. Such as giving her the silent treatment, checking her phone, monitoring her movements, or trying to lower her self-esteem so she doesn’t feel as good about herself.

When you feel jealous, there are usually two underlying reasons - your girlfriend's bad behavior or your own insecurities. In other words, the problem is either you or her. 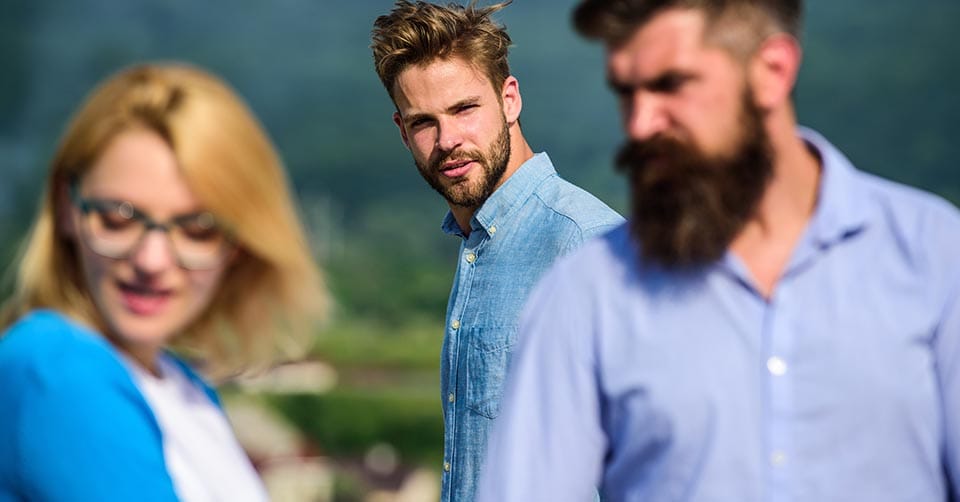 Jealousy is a normal, primal reaction. It evolved as an alarm bell to the threat of infidelity. From an evolutionary point of view, if your girlfriend is cheating it could mean your genes get weeded out of existence, and worse, you use your resources to raise another man’s offspring.

If you are feeling jealous because your girlfriend has given you good reason to suspect that she is untrustworthy, then it's served its evolutionary purpose. It’s warning you that your evolutionary success might be threatened by infidelity.

You shouldn’t feel jealous if it’s just your insecurities

If your girlfriend is a decent, respectful, and trustworthy person yet you still find yourself feeling jealous. It could be down to your own insecurities and nothing to do with her at all.

If you feel like you are not good enough for her then your insecurities might eventually push her away. If that is the case, you need to work on getting over your insecurities by becoming mentally and emotionally stronger. 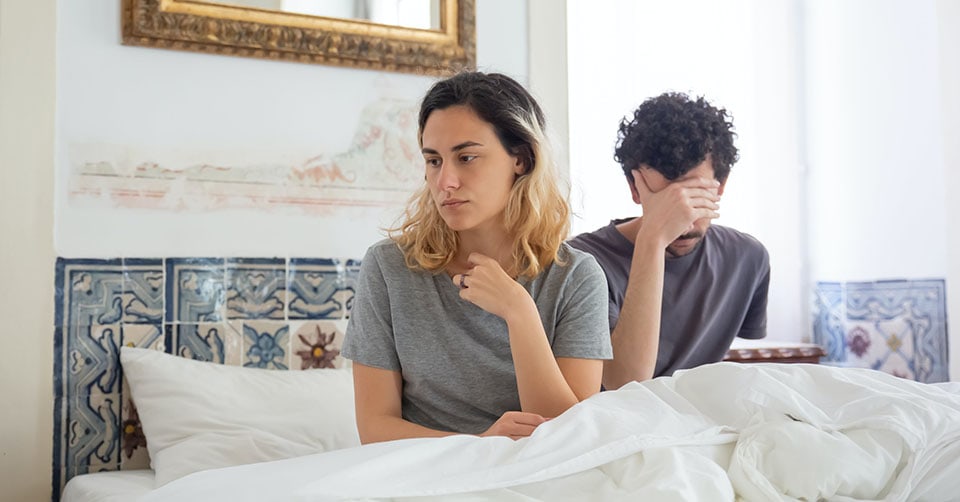 If your girlfriend is treating you badly, you need to set some boundaries. A lot of guys are afraid to stand up for themselves because they fear losing her. If you don’t stand up for yourself, she will lose all respect for you and she knows she can do what she wants without any repercussions. This is not the basis for a healthy relationship.

So if your girlfriend is talking to other guys, the first thing I would recommend you do is…

Get balance in your life

When you don’t have anything going on in your life besides spending time with your girlfriend, you will become needy and clingy. You won’t want to lose the most important thing in your life. This can make you worry that she fancies other guys more than you or that she is too good for you and just doesn’t realize it yet.

The solution is to make your life your number 1 priority and look at her as the icing on the cake but not the cake itself. Start pursuing your passions, spend time with male friends, try doing new things or learning new skills, take on challenges, etc.

So at least if you do have to confront her about talking to other guys, you are more willing to walk away with your great life still intact.

By working on your life, you will start believing in your attractiveness as a man and feel less insecure, jealous and needy. But if your girlfriend is still talking to other guys and it is bothering you, it's probably time to lay down a boundary.

I remember a time in my own relationship when my girlfriend was texting this guy she knew was into her. I felt a little bit awkward knowing this guy was trying to make moves to oust me even though I trusted my girlfriend.

Anyway, I pulled her aside and I told her that I was uncomfortable with her texting that guy and if she was committed to our relationship, she would need to cut it out. She did. It was no big deal to her.

If she wasn’t prepared to cut out the other guy then it would signal to me that she values validation more than our relationship. This would leave me with two choices - stay in the relationship and flirt with other women or walk away. And in this case, I was prepared to walk away because I hate it when my girlfriend talks to other guys who are clearly into her.

Knowing your girlfriend is talking to other guys is going to present challenges for you and your relationship. You will never be able to maintain her attraction if you are insecure and jealous all the time. So work on building a great life while also being willing to challenge any bad behavior on her part.