How to Get a Girl Back Who Lost Interest: Make Her Want You Back 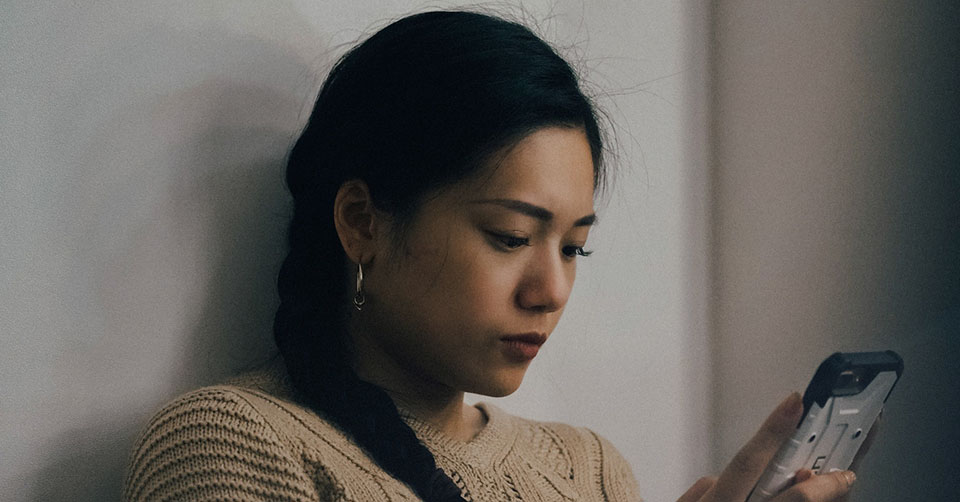 A guy likes a girl, she likes him back – or that’s how it seems – then she goes distant out of the blue. Or maybe she asks for a breakup or to “just be friends". It's a tale as old (and less romantic) as time that men of all ages ask how to get a girl back who lost interest.

In this article, I will cover some of the ways you can get a girl who lost interest to like you back. These are tried and proven ways that will either get her back (best case scenario) or save your dignity (worst case scenario). Either way, you’ll get to understand how female nature works.

How to Get a Girl Back who Lost Interest

To win back a girl who lost interest, you need first to identify what you meant to her. It's a whole different story if she’s your ex or a girl you’ve been seeing for a while than if she's a girl you met on Tinder and is no longer responding.

Case #1: The girl lost interest after dating you (or she was your girlfriend)

In this case, there are two ways to gain the girl's interest back

If she left you, then she did it for a reason. And it probably wasn’t because she's intimidated by how awesome you are.

The main reason a girl leaves a guy is that he wasn’t as attractive as he used to be (or as she thought he’d be). And I'm not just talking about looks here. You became more agreeable or needier, you put her on a pedestal, or you became a lot less interesting.

How can you turn it around?

Lay low, work on yourself, then come back like a new guy.

I call it the Bruce Wayne/Batman effect.

He wasn’t in great shape, went through a tough time, got his ass kicked hard by Ra's al Ghul, then came back to turn Gotham upside down.

You’re Bruce – hopefully with all the money – and she’s Katie Holmes.

And your job is to come back as a new man, and see if you can wow her again.

Disclaimer: As much as I like the idea of reinventing yourself, I don’t think it's the best way to gain a girl's interest back, especially if she's your ex. It’s much easier to invest in a new relationship than fix an old one.

If you want to change, do it for yourself so you can feel better and attract better women. If you do it for her, then deep down you’ll always be dependent on her opinion of you. And this is the type of mental slavery you want to stay away from.

Maybe not the healthiest way to go about it, especially if you're using another woman to attract your ex. But this might just be what your ex needs to see how much she wants you.

Nothing makes a woman more jealous than seeing her man with someone hotter.

She may not show it, but that will drive her crazy.

Again, I don’t want you to do it just to get back at her. She will know.

Let things flow naturally. Go back to your dating life, and work on yourself – and on your dating skills – so that you attract better women than her. If you do it right, you won’t even be reading this article anytime soon.

Case #2: You met online, texted for a while, then she lost interest

Texting is a slippery slope. On the one hand, you can feel like you're really getting to know her because you're communicating all the time. But that can just be an illusion since you've never actually met to test if there's chemistry between you. That's why a girl losing interest in you happens all the time when you're just texting. Here's what to do if she is no longer interested even after you've been talking for a while.

Think of these two guys:

Guy #1: He’s been with women before. He knows their nature and that they can be distant from time to time – either purposely or because they’re busy – and he takes their absence lightly. He may not even notice it since he leads a busy life or has other dating options. He doesn't care too much and that, in itself, is attractive.

Guy #2: Still new to dating. Emotional and panics when a girl goes silent. He checks his phone a gazillion times and texts her prematurely because he feels hurt.

Who do you think she’d go out with? I’m not gonna answer, you already know.

I don’t make a big deal of it if a girl doesn’t respond. I’d often check our chat to see if I said something offensive – I sometimes do – then I’d give her a day or two before texting her again.

Most times she will just be busy. So I'd text her back and forth, spike her emotions with a few teases or jokes, then ask her out.

Remember, until you meet and sleep together, you're still not her top priority. So don't act as if you are and know where you stand. Don't be angry or butthurt. Stay calm and send her a short re-engaging text. If it works, it's showtime.

Gauge her level of interest and see if you can get her back on an emotional high. If it doesn't work, move on. But if you can, then it's time to ask her out.

I won't give you romantic gestures to win her back because frankly, that just screams NEEDY. Instead, I want you to learn from my experience.

I texted this girl a while ago. We had a fun convo on Bumble that ended with a long phone call, a number, and a planned date. The next day – one day before our date – she texts me but I was busy, so I didn’t reply back until midnight (which was six hours later).

What did the girl do?

She didn’t text back.

What did I do?

Didn’t budge or care about the date. I ignored her and got another one lined up, and a night out with the bros as plan B.

One day, two days, and it’s date time, but I didn't freak out.

Just left it and waited.

Then six days later, she pops up again. I tease her about it, we exchange a few lame texts that let me gauge her level of interest. I know she’s still interested – even more than before – but there’s a lot of tension in the air that needs to be blasted.

So I did the sexiest thing a guy can do (second to multiple orgasms):

I showed her I UNDERSTOOD her.

Check the text and the red arrow below. 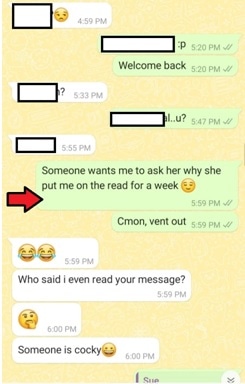 We texted for like 4-5 hours that night. She called me the next day and we met two days later. ALL thanks to me being cool about a girl not texting me back. It's a great way to get a girl back who lost interest.

2. Accept that you’re not compatible

Cute but boring. I’ve seen that before.

Sometimes you’re better off not texting a boring girl than chasing her just so you can get laid. Personally, that's what I do. If I don't like her that much, I move on.

I was texting another girl while texting the one in the previous chat. And she was super hot. She sent me two voice notes and a flush of compliments. We exchanged a few texts then I got her number for a same-week meetup.

This is how it started... 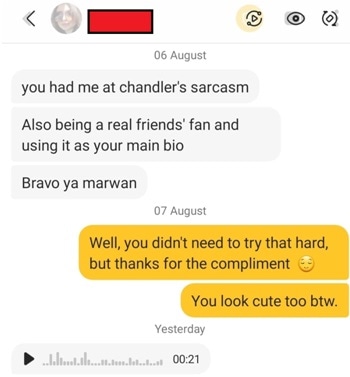 But as we talked, things fell apart. I didn't feel the vibe and my guts told me I won't like her (and I trust my gut A LOT). So that was our last chat before I stopped texting. 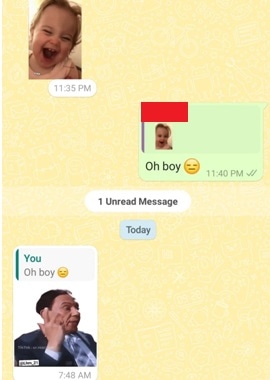 I didn’t do it to make her invest more. I just didn’t like her that much. It wasn’t about the girl, I just didn’t feel the chemistry.

Now, STOP, take a deep breath and think of it from the girl's perspective.

Some women will go silent on you just because they're busy or not vibing with you. She doesn't hate you, you just aren't compatible, and it's fine. Because you're not supposed to vibe with everyone.

So, the next time a girl leaves you on read, ask yourself do I really like that type of girl in my life? If yes, then feel free to re-engage her and see if you can spike her emotions again. But, if the answer is: no, then don’t even bother texting her.

What to Do When She Is No Longer Interested

First off, you shouldn't feel depressed about a woman being disinterested. Annoyed, maybe. But not gloom and doom depressed.

There's a rule that says, "A man with options is a man without need."

If you can't seem to get over one girl, then it's most likely because you had very few options lined up for you. You can focus on winning a girl back who lost interest or you can focus on yourself instead.

And my advice, in this case, is simple:

Go out and meet more women, or build a strong dating profile that gets you matches round the clock. That will be enough for you to forget about that one girl who lost interest. And if you can't attract more women, then ask yourself why you aren't getting any. Most likely you'll find a few areas that you need to work on: looks, social skills, interests, knowing when and where to look, etc.

Assess those problems and plan to fix them.

Work out, dress better, take good care of yourself, get some useful hobbies. Then improve your online and offline game. That shouldn’t take you more than a few months, and you’ll come back to date better and hotter women who are more invested in you than the ones from before.

Once a Girl Loses Interest, Is It Over?

Yes, you can re-attract a girl who lost interest, but reconstructing a failed relationship takes more energy than starting a new one.

Your perfect girls are the ones who are heavily invested in you. You say jump, she says how high. That's the type of affection you want in your life. So if she's giving you crap early on or she doesn't seem to care that much about you then why bother?

She may be a stunner that you just want to bang, but again, I prefer compliance and heavy investment. But, again, it's up to you to try your luck. Just don't be needy as you do it.