Surprising Ways Your Online Dating Pictures Can Hurt You

The first impression you make online with a man or woman comes from your online dating pictures. Before your potential soul-mate has an opportunity to read your carefully crafted words they have already formed an impression of you from your photos. This impression, positive or negative, will color how they respond to everything you write. You want to be careful here, especially if you are on a legitimate site like those on our Highest Rated Cougar Dating Sites list.

YOUR PHOTOS ARE THE ONLY PART OF YOUR PROFILE THAT ARE GUARANTEED TO BE SEEN BY EVERYONE.

Ensuring that your photos show you at your best is vital to online dating success. Most people focus on what the "right" things to do in a photo are, as they should. However as the online dating company Zoosk recently discovered in a survey* of 4,000 online daters there are some unexpected mistakes that can be made with online dating pictures that can sabotage you.

Surprising Ways Your Online Dating Pictures Can Hurt You

Like fake online dating photos, choosing bad dating photos can also turn potential matches away. So if you think you've got the perfect photo to put on your dating profile, see if you're doing one of the following:

Posing With Your Pets Is Hard To Pull Off 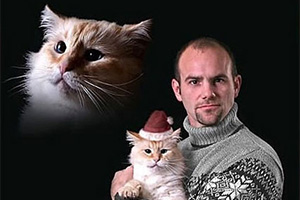 This may be a bad example...

Everyone agrees that your cat Captain Boots is adorable. Nobody would deny that.  You might even think it's a dating photo older women will love. Unfortunately, he is killing your chances online with a sizable chunk of the dating public. According to Zoosk:

"Both men and women who posed with animals in their photos lowered the average number of messages they received by 53%."

That is a HUGE decrease in the number of messages received. A decrease that large also shows that it isn't just the non-pet owners that are turned off by your snuggle fest with Captain Boots. Men and women across the board are put off by photos with animals. Even if you have that amazing photo of you with a tiger from your trip to Thailand you might reconsider including it. Cougars don't like to see other cougars.

This may strike you as little odd, especially considering how many dog and cat lovers there are out there. It starts to make more sense if you take a minute and try to think of a sexy photo with a man or women and a dog. Any luck? No? Then you should consider keeping Captain Boots out of your online dating pictures.

Having Your Human Friends Around Isn’t Much Better

You might think that having photos with you and all of your beautiful and interesting friends would be a positive right? Surely being able to see how fun and social you are would be a attractive potential dates?  Lets see what the survey says:

"Having more than one person in a photo reduced the average number of messages received by 42%."

Another GIANT decrease in the number of messages received over a relatively small detail. Those of us who are dating online want to know exactly what we are dealing with. If you are forcing someone to play a guessing game with your online pictures you are clearly going to be getting less than ideal results.

You want to make your profile as easy as possible to take in and you want to make sure the focus of your readers' attention stays on you. Naturally, you can do that with a photo or an interesting online dating bio.

No Selfies For The Boys 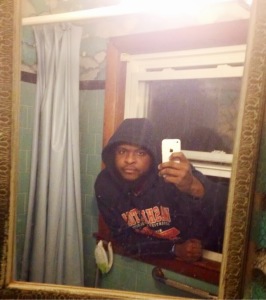 This one may not be as surprising as the previous two. What may be surprising is how big of an impact a selfie photo can have on your chances:

"Men with selfies as online dating pictures lowered their incoming message average by 8%."

That is a pretty steep drop just for having a selfie. Who doesn't appreciate a tasteful bathroom mirror selfie now and then? What may be more surprising is that women with selfies in their online profile pictures were MORE LIKELY to be messaged than those who didn't:

"Women with selfies as online profile pictures increased the average number of incoming messages by 4%."

Talk about your double standards! Upon further consideration it makes more sense. Women tend to take selfies of themselves looking good in interesting places. They also are far more likely to take several and choose the best one. Guys tend to take the bathroom mirror selfie route without putting nearly as much thought into the selection. If you want your photo to get the attention of women online, avoid any and all selfies.

Women Should Stay Inside

We all know that the location of your online dating pictures is extremely important. You can tell a great story just by showing yourself in a variety of situations. It turns out that men tend to prefer that story being inside:

That is a big drop based purely on location. To add insult to injury, the double standard train keeps on chugging along when we look at the men:

"Men saw in increase in messages of 19% when their online dating pictures included photos taken outside."

This is more in line with what you would expect given common gender norms. Being "outdoorsy" is more commonly considered an attractive trait for men than women. It's just one of the many online dating stereotypes out there. If any of you ladies are unhappy with that statistic I would be more than willing to trade you pictures in the woods for selfies!

Ultimately, like any general statistic, results will vary. If you have any concerns that a photo with your cat or a picture of you on a hike are negative have an opposite sex friend take a look. Statistics are averages and there will always be outliers so don't stress over them too much.

Avoid these common mistakes if you can but ultimately having a solid total package will get you the best results. For best results always use a legitimate online dating site such as those vetted in our Best Online Dating Sites Review.

*For more great statistics from Zoosk visit their site*