19 Things Girls Do When They Like You: Don't Miss The Signs 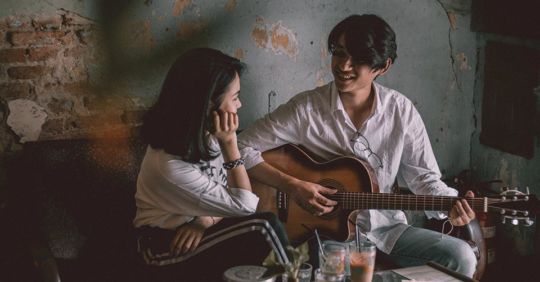 We get questions like these in our mail on monthly basis. These questions will never stop as long as the concept of dating exists. A guy likes a girl, they chat for a while, she seems friendly and now he’s hooked and wants to show his feelings. But – like every other man out there – he doesn’t want to make the wrong move in case she gives him the infamous “but I only think of you as a friend” plus a kiss on his cheek.

When in love, girls aren’t normally the risk-taking gender. Not because they lack something, but because showing clear signs of affection can give a girl a bad reputation. This – in tribes of 1,000 people or less – can kill all hopes for her to have a child. Thus, girls learned from an early age to be discreet and subtle when showing signs of interest and leave it to the man to declare his love.

In this article, we share a plethora of signs – both subtle and clear – that girls throw at the guys they like.

As I said earlier, girls are the subtle gender. She will like you, throw hints at you, and wait for you to make a move. However, your move should be quick. Nothing turns off a woman quicker than a man who doesn’t read signs.

Women hate it when they throw themselves at a man who doesn’t like them back. Also, being a man who can’t read a woman’s signs of affection will also tell other women that you’re clueless about their emotions and that you’ve never been with enough women your entire life. And no woman wants to be with other women’s reject.

Below are some of the subtle things girls do when they like you, pay attention to them, and act on them when they show up.

If she asks you this question then she’s either kind enough to hook you up with her friend or she wants to know if there’s a spot available for her. Some women will use this question to trick you into believing they like you, watch out for them.

But the mere fact that she's curious about why you're single is already her way of sizing up whether she wants to be with you or not.

2. And a lot of personal questions

She wants to know everything about you.

"What do you do?", "How are your parents?", "What's your type?" and "How did things end between you and your last girlfriend?"

If a girl throws these questions at you with no specific reason, there’s a chance she’s been thinking about you for a while and wants your answer to fill her information gaps.

3. She remembers all the little details

She knows your dog’s name, your zodiac sign, and how much you love the Lakers. She even finds joy in seeing you surprised by her unmatched attention to detail.

4. She wants to get to know you

If you like someone and want to see if they’re a good fit, you’ll ask them a lot of questions so you can quickly judge their character. That’s what sane people do.

5. You can ask her to do little things for you

If women don’t like dominance, Fifty Shades of Grey wouldn’t have sold +100 million copies. Women like to be bossed around a bit by the right guy.

If a girl has a genuine burning desire for you, she will try to do what you want no matter how inconvenient it might be for her. If you want to see this in action, ask her to do something as simple as holding your jacket for you. If she likes you, then most likely she’ll do it without a second thought.

6. She texts you first (almost always)

She’s always the first to say what’s up and sends you blocks of texts and tons of emojis. She also replies almost instantly to your texts and rarely ends the conversation. If that’s how you guys roll over the phone, then there’s a big chance she likes you.

7. She asks for your help

Some girls will avoid asking a guy they don’t like for help so he doesn’t catch feelings (I said some, not all). However, those who like you won’t hesitate to ask for a hand when needed. She’ll ask for your advice, even on trivial matters, and will delightfully come back to show you the results and see that look of approval on your face.

8. She looks her best around you

That’s a big sign. Girls are more flamboyant by nature. They pay more attention to the way they look, probably more than men, so expect all girls to look their part around you. Yet, the one who likes you the most will go the extra mile. I mean, tight dresses, no bras, and your favorite perfume. If you think she likes you, then try to tease her about something she wears. Most likely she’ll show up the next time without it.

9. She gives you those Bambi eyes

You know those anime wide eyes that girls show when they like someone? When we like someone, the mind’s unconscious response is to widen our pupils a little bit when we see this person. It’s your mind telling you “I want to see more of this person.” If a girl gives you Bambi eyes, there’s a big chance she likes what she sees.

Not-so-Subtle Things She Does If She Likes You

Can girls be bold?

Sure, especially in our time. It’s not the 1920s anymore and girls do have the courage to make the first move – or at least be less subtle than their grandmas were. How?

By showing these signs…

Proximity is a sign of attraction. If a girl likes you, she’ll get touchy or try to be as close as possible to you. Notice how she sits when you’re around you. If a girl likes you, she’ll try to sit next to you rather than face you with her chair. She’ll touch you for no reason, grab your hands, touch your arms or ask for them as you cross the road.

Does she look at you and smile/giggle or give you a look that says “come talk to me”? Or maybe she's making eyes at you because she really likes what she sees. If yes, then she’s probably hooked already. Even if she's shy, this is still one of the most important things girls do when they like you.

12. A ton of compliments

A woman’s compliment usually holds more water than a man’s because, unlike men, women don’t compliment men that much. If a girl compliments how you look, dress, or get things done, she probably wants to say that she likes you.

She plays with her hair around you, stands with her body/feet facing you, and leans in each time you speak…these are just some of the body language signs that she likes you.

Now that you found out about the subtle and not-so-subtle signs girls give away when they like you. These are some of the things they actually say when they want you to make a move:

This translates to: "I already found the one I like (and it's you)." Women enjoy the attention they get on apps like Tinder, Facebook and Instagram. If a girl deletes her Tinder shortly after meeting you it means she’s denying herself free attention and focusing only on you. That’s huge.

If she says it voluntarily, it probably means “I’m single you moron… do something!” No girl will ever say she’s single out of the blue unless she either wants you to set her up with your friend or needs you to make a move on her.

Why would she ever talk about you to her friends? The thing with women's conversations is that they tell their friends to make sense of what they're feeling. So if she tells her friends about you, it's likely because you made an impression on her and she wants her friends' approval about dating you. So you better hope your friends like what she's been telling them about you.

That’s a killer. Her mom won’t call her on Sunday asking, “who got promoted at work this week?” Moms often ask one question, and one question only “Are you seeing someone new?” If she tells her mom about you, there’s a big chance you are that new someone.

If a girl says that you’re always busy, that means she wants your attention. So I play along and tell her that I have stuff to do... But then again, does she have something else in mind for me to do? I often use this to tease her more until I make her blush.

Don’t take her long chats with you as a concrete sign of affection. Girls can sometimes drone on just to fill in the silence. However, if she tells you intimate personal or family secrets that very few of her friends know, then it means you’re either one of her closest buddies (too bad) or she likes you and wants to open up to you (excellent).

These are just some of the things girls do when they like you. If you see more than 3 signs, then there's a huge possibility that she's into you. If that's the case, try to find out more. Spend a little more time with her and talk to her about anything. This might open your eyes to some of the other signs that she likes you, and then it's time for you to make your move.